A hot day in Tarangire and a few thirsty trunks

A hot day in Tarangire and a few thirsty trunks

The Tarangire National Park is definitely one of my favourite places. Why?
A park with diverse vegetation – ancient baobab trees, African ebony trees, wild palms and landscapes varying from savannah to swamps, the park is home to a variety of wildlife. You can never be bored in the Tarangire!

The life source of this park is the Tarangire River which even in the driest of months supplies life-giving water. Some of the tributaries do dry up so there are several seasonal sand rivers within the park.
Often when you tell someone that elephants have an incredible sense for finding water even in a completely dry sand river they will not believe you. Whilst on game drive in Tarangire recently, our group experienced this water finding skills first hand.

We watched as a female elephant stuck her trunk into a hole that had been dug before we arrived and before we knew it, she was spraying herself with water! She repeated this a few times, not drinking, but rather spraying the water. This is done for two reasons. The first is to cool themselves down and the second is to get to the cleaner water below. An adult elephant can easily drink up to 80 litres of water per day and if possible, needs to drink every day. That is why in the dry season they do not wander too far away from possible water sources like sand rivers. 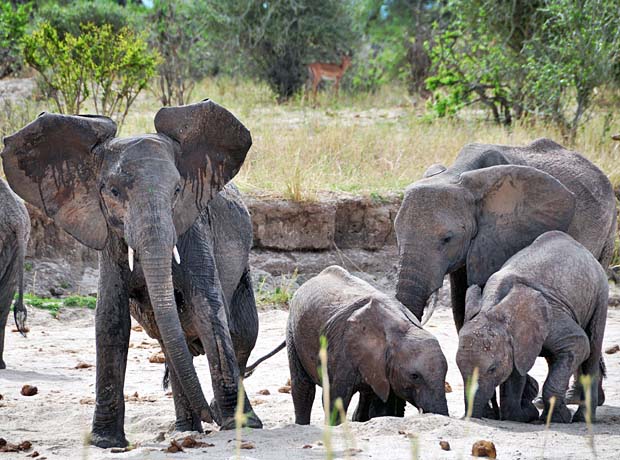 Elephants live by a strict hierarchy and when it comes to drinking there are no exceptions.  One after another older bulls and cows came to where the others were drinking and literally pushed the drinking elephants out of the way. On that particular day it was extremely hot and one could sense the desperation within the group. Interestingly enough the younger calves  (between one and 3 years old ) were still allowed to drink with the bigger bulls and cows. Usually after a herd has finished drinking and moved away, other smaller animals rush to the freshly dug hole to also quench their thirst. 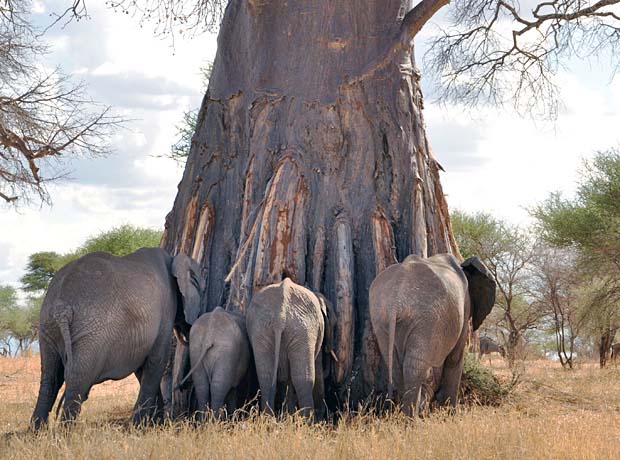 But there are other sources of water as well. Driving around the park you might notice almost all baobab trees have the same scars. These scars were made by elephants; they know that baobabs are a source of water. They use their tusks to rip off strips of the bark which is chewed. Digging deeper into the tree the elephants sometimes find the reservoir of water which accumulates inside the tree. Unfortunately sometimes a herd of elephants damage the tree beyond repair and eventually the tree dies.

There is life in everywhere, even in a baobab tree and a dried up river.