A private meeting with a large pride of lions

I have been to the beautiful Serengeti National Park countless times. Friends ask me sometimes if I don’t get bored of it? To which I usually answer; never!
This 14700km² UNESCO World Heritage Site teems with life and the best part is that no two visits are the same. I always have an experience that I have not had before and I think that is what makes it so special to me.

This year 2016 started out very wet as a lot of meteorologists warned of an incoming El Nino-related weather pattern. East Africa usually gets effected by severe downpours and for a while it seemed that they were right. The heavy rains continued to fall in parts of the Serengeti and Ngorongoro up until the start of February. This is unusual as the short rainy season is usually from mid-November to the end of December.

Going out into the bush in the middle of February, I must say that I felt a little nervous about the weather – the roads were almost impassable – and if the wild creatures would be out for us to see in the long green grass. Luckily for our group, the weather was on our side and we experienced a lot. One of the highlights was whilst on game drive in the boundary area between Ngorongoro and the Serengeti. It was a hot and bright day and the sun was shining directly from above as we drove around scouting the area. At one point it felt that we were the only ones out there. One of our guides Enock suddenly stopped and looked curiously towards a solitary tree. 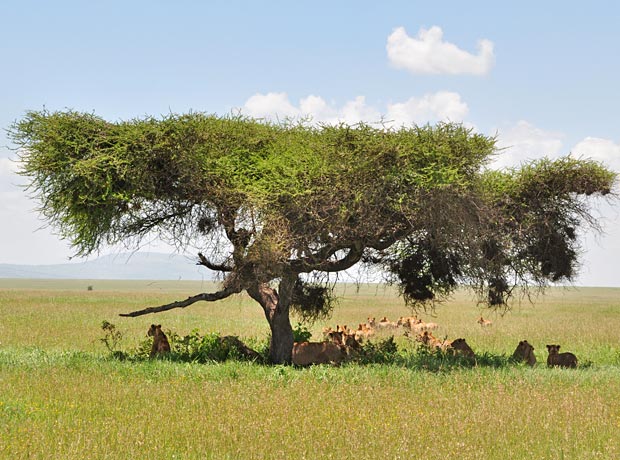 Before I even managed to grab my binoculars, he smiled and said “do you see the lions in that tree?” He managed to spot the cats with his naked eyes, over 500m away!

We approached the tree and as we draw nearer there was an explosion of cats! Lions started running in all directions, obviously we had woken them from their midday siesta. Due to the fact that it was very hot and this was the only tree in the area, we waited quietly as one after another, the lions returned to the shade. 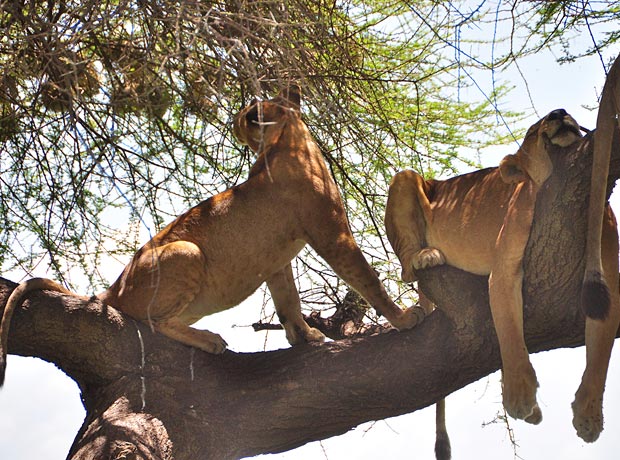 We watched in awe as the large pride rested. Some of the older females preferred to hang around in the branches of the tree as the younger cubs rested in the shadows below. I have seen big prides of lions before but this was by far the largest – after a rough count and some discussions we agreed to a number: 31 lions.

One of the things that made this already unique experience even better was that we were the only people there! The guides joked and said that they had called the lions in the morning before we left.
We sat with the pride for some time, listening to them communicating, watching them being lions, doing what lions do, before leaving them to their peace and quiet. Our guides later told us that the tree where the lions were, was actually going to be our lunch spot. It seems though that they had the same idea and beat us to it.
We were happy to eat somewhere else and let them be.