„Holiday alongside the wildebeests“

Our 4th Tanzania holiday was (once again) dedicated to seeing as many wildebeests as possible. We were also determined to witness the “crossing” with crocodiles and all – just as we had seen on TV so many times before. We set aside 3.5 weeks for this venture and except for the first two nights upon arrival and a week of permits for special campsites, nothing was pre-booked. So there we were, travelling with 2 cars, tents, guide, driver and cook. 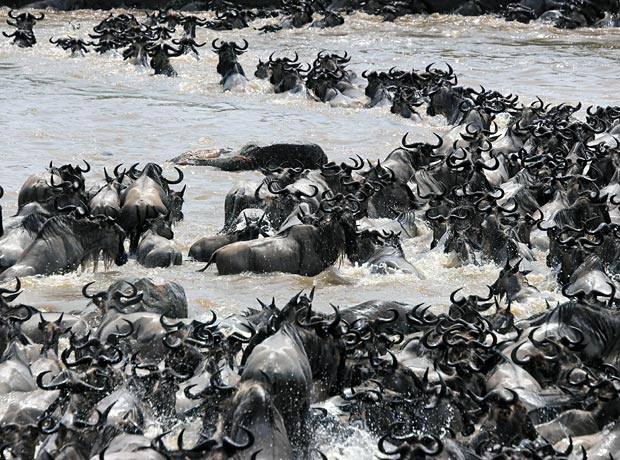 After two days in Tarangire National Park we made our way to the Serengeti Lobo region via Lake Natron. From here we continued to our special campsite at the Sand River / Mara on the border to Kenya. Here we spent 7 nights in tents amidst the wildebeest migration. The animals could be seen and heard day and night and many herds consisting of thousands of animals travelled through the areas around us on their way to the Sand River and the Masai Mara. During 5 days we were able to see wildebeests crossing the river and while doing so, being killed and eaten by crocodiles, drowning or being trampled to death. 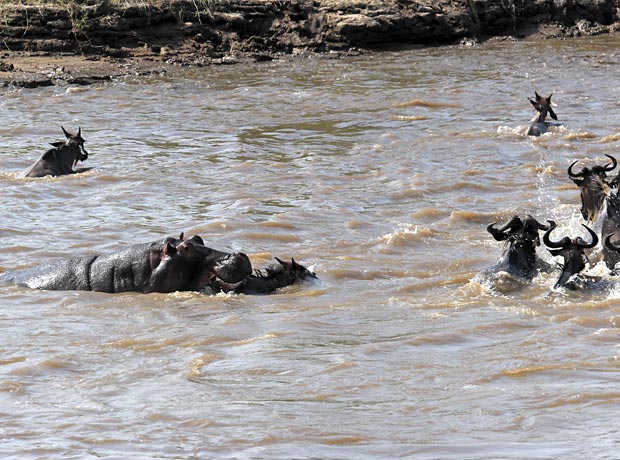 We also saw many animals that tackled the river without any problems. And then of course there were those, who managed to escape the hungry crocodiles or climbed over the crocs with ease. The sound effects and dynamics of the river crossing in reality is priceless and absolutely incomparable to any TV show.

On the last day at the river we were given a worthy farewell by approximately 1000 vultures, who patiently awaited their turn at the buffet. 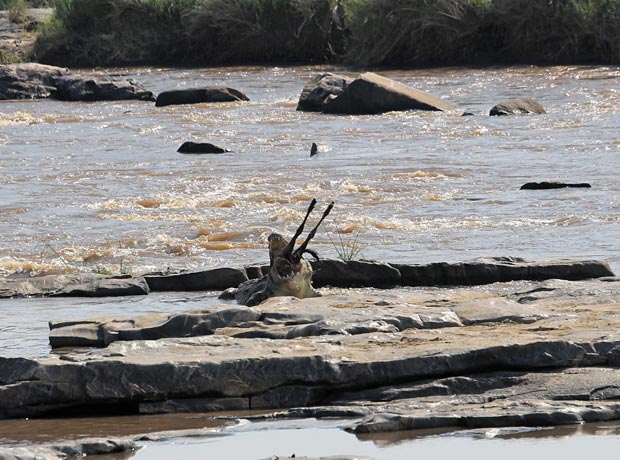 We then continued to Lake Victoria to stock up on groceries and to enjoy some fish, before returning to the Serengeti through the Western Corridor. We spent three days in the Seronera region to look out for the big cats that call this region their home.

Just as the wildebeests, the cheetahs, leopards and lions were cooperative and made themselves available for photos. Apart from that, the plains were rather dry and empty during this time of year but offered an excellent contrast to the Mara region.

Spontaneously we then decided to book a lodge close to Arusha and to end off our safari with a visit to Arusha National Park. We saw many flamingos at the Momella Lake and the Colobus monkeys from the park even visited us at the lodge.

It was an absolutely perfect holiday and our guide Wilson and our cooks Ernest and Innocent looked after us very well.

This was our 5th holiday with Wilson and the 3rd with Ernest. We arranged the last three holidays individually without a lot of preliminary planning. The flexibility of the people on site allowed us to spend some more time at a certain location and to adapt our travel plans according to the “animal situation”.

We wouldn’t be typical Germans, if we didn’t find fault with something, so here goes: The 18% VAT and Ngorongoro Conservation fee increase by 01 July 2016 with merely seven days’ prior notice was rather unpleasant.