Call of the wild

On this 6-day camping safari, you will explore four of Tanzania’s northern nature reserves. Apart from the Serengeti National Park and the Ngorongoro Conservation Area, you will also visit the Tarangire and Lake Manyara National Park. You will see swamps and savannah, huge herds of elephants and a crater full of game. 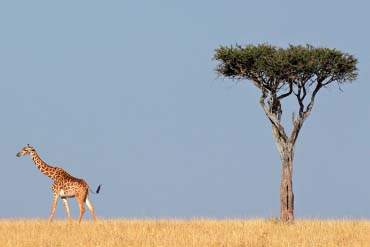 In the morning you will start your safari with a drive to the Tarangire National Park. The park, roughly the size of Luxemburg, covers an area of approximately 2,600 km². The landscape of savannah, seasonal swamps and giant baobab trees is home to Masai giraffes, buffaloes, hartebeest, eland, fringe-eared oryx, the weird-looking long-necked gerenuk and over 550 species of birds. But it is the elephants, Tarangire is famous for and the park, where herds of up to 300 animals roam, is probably one of the best places in East Africa to see them and to get close to these giant creatures. After an extensive game drive, you will arrive at a campsite inside the park, where you will spend the night in a tent.
Lunch; Dinner

After breakfast you will drive to the smaller Lake Manyara National Park. The park is known for its over 400 bird species, primate-filled forests and grassy plains. A large area of the park is covered by the alkaline Lake Manyara, which is home to colonies of flamingos and other water birds. Apart from elephants you might also spot giraffes, hippos, wildebeests, impalas and teeming groups of noisy monkeys and baboons in the forests near the lake. In the afternoon, after an extensive game drive, you will travel to the small multi-cultural village of Mto wa Mbu, on the outskirts of Lake Manyara National Park. You will camp at a campsite where you can relax at the pool or bar.
Breakfast; Lunch; Dinner

Today you will continue to the lush highlands where crops such as wheat, corn and coffee are grown. While travelling through the Ngorongoro Conservation Area you might stop for a breath-taking view over the Ngorongoro Crater before continuing to the Serengeti National Park. Serengeti means “endless plains” in the language of the Maasai and you will see the grassland savannah stretching to the horizon. Bizarre rock formations called kopjes dot the grassy landscape where predators are often seen. Depending on the season you will witness the migration of thousands of animals for which this park is famous for. You will arrive at your campsite in the Seronera Valley in the central Serengeti in the late afternoon. After supper you will fall asleep to the sounds of the African bush.
Breakfast; Lunch; Dinner

The whole day will be spent on a game drive in the Serengeti. The areas that you visit will depend upon where the migrating herds are (predators usually follow closely behind the trekking animals). During the short rainy season in November and December the herds move from the hills in the north to the plains in the south. During the longer rainy season from April to June they return up north. The yearly trek is determined by the rainfalls and the location of the herds might vary from year to year but your guide will know where to find the animals and where to see them best. Apart from wildebeests and zebras you might also spot predators such as lions, leopards and cheetahs. You will spend another night at a campsite in the Seronera area.
Breakfast; Lunch; Dinner

After breakfast you join another game drive in the Serengeti National Park. This morning you might spot animals you haven’t seen yet. The Serengeti is also home to the Big Five – lion, elephant, buffalo, rhino and leopard – and today you might be able to see all the members of this group. After lunch at a picnic site, you will drive in direction of the Ngorongoro Crater. As soon as you have reached the edge of the crater, the caldera opens up before you. Over 25,000 animals live in this approximately 20 km wide crater. You will spend the night at a campsite directly on the crater’s edge with fantastic views over the caldera.
Breakfast; Lunch; Dinner

Rise and shine! After breakfast at daybreak you drive down into the crater. Inside the world’s largest caldera, you will see a diversity of wildlife ranging from black rhinos, Grant’s and Thomson’s gazelles, lions and leopards to elephants and mountain reedbucks in the forests on the slopes. You might also see buffaloes, spotted hyenas, rare wild dogs and some of the more than 500 bird species of the area. After an intensive game drive and a picnic lunch, you will leave the caldera in the afternoon and travel back to Arusha where you will arrive in the early evening.
Breakfast; Lunch

What can I expect in terms of group size?

Is there an age limit?

Where will I spend the night?

Are there ablution facilities at the campsites?

What kind of vehicles are used?

What meals does the price include and what kind of food can I expect?

What do I need to bring along?

What are the luggage restrictions?

Should I bring some extra cash with me?

Is a visa required for this trip?

Do I need to get myself vaccinated and is malaria a concern? 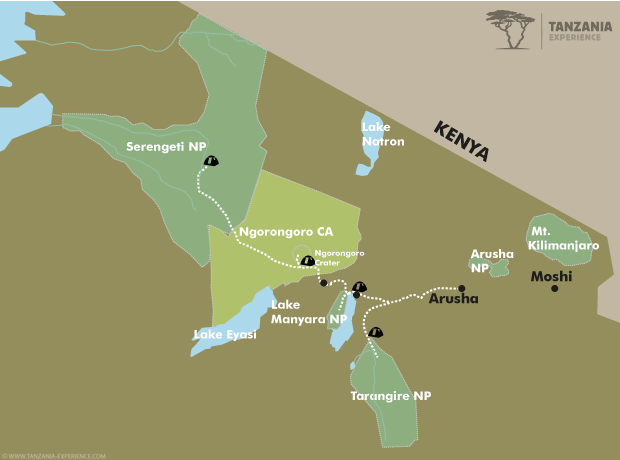 …Peter is an excellent cook... and the tents were fantastic. One of us even considered acquiring one for home. The mattress were very good, even for 7 nights …Aline | Switzerland