On this 6-day lodge safari you will visit the Tarangire National Park, the Ngorongoro Crater and the Serengeti National Park. Watching thousands of wildebeests and zebras crossing the grassland savannah is an experience to behold and surely one of Africa’s natural wonders. In order to increase your chances of witnessing the Great Migration, we choose your route and the order of camps according to your time of travel. 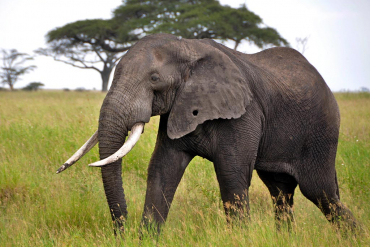 After meeting your safari guide in the morning, you hit the road in your 4×4 Toyota Land Cruiser and drive to the Tarangire National Park. Open savannah, baobab trees, seasonal swamps and the life-giving Tarangire River characterise the landscape of this beautiful national park. Animals gather at the river, as elephants, giraffes, bushbucks and hartebeests can often be seen. You might even be able to spot the fringe-eared oryx or the weird-looking gerenuk. Tarangire is also home to buffaloes, zebras and wildebeests which are always closely followed by a range of predators including lions. Your safari vehicle has an open roof and is the ideal viewing platform to appreciate the nature and animals around you. In the late afternoon you will leave the park and travel to the Sangaiwe Tented Lodge, where you will spend the night.
Lunch; Dinner

Today’s journey takes you past Lake Manyara into the fertile Ngorongoro highlands. Crossing the Ngorongoro Conservation Area, you will reach the vast open plains of the Serengeti National Park in the early afternoon. The following days are set aside for exploring the famous Serengeti, home to the Big Five – elephant, buffalo, lion, leopard and rhino – and many other animals. You can look forward to many new wildlife sightings during your game drives as no day on safari is the same. You spend the following three nights at the Kati Kati Tented Camp. Depending on the season, you will either stay one night in the central Serengeti and two nights in the northern Serengeti (June – October) or the southern Serengeti (January – March), or you stay all three nights in the central Serengeti (November – December & April – May).
Breakfast; Lunch; Dinner

These two days are all about the Serengeti. Together with your guide, you scout for animals in this pristine corner of the world. You are in no rush and have plenty of time to observe the park’s wildlife and learn about animal behaviour as well as their social structures. The Serengeti National Park is the third largest park in Tanzania and is stunningly beautiful. While the landscape in the south is characterised by open grassland as far as you can see, open woodlands and hills are predominant in the north and west. Together with the Masai Mara, the Serengeti is host to the Great Migration of millions of wildebeest and zebras, one of the greatest shows on earth. Your home is one of the Kati Kati Tented Camps. In order to increase your chances of witnessing the Great Migration, we choose your route and the order of camps according to your time of travel.
Breakfast; Lunch; Dinner

After breakfast you will continue your safari in the Serengeti National Park. In the Seronera Valley you might be lucky to see predators hunt as animals gather at the waters during the dry season. After lunch at a picnic spot you will slowly drive in the direction of the Ngorongoro Crater. As soon as you have reached the crater you will have a superb view of the caldera. This approximate 20 km wide crater is part of an UNESCO World Heritage Site and is home to over 20,000 animals. You will stay at the Ang’ata Ngorongoro Camp on the crater rim from where you will be able to enjoy an incredible sunset.
Breakfast; Lunch; Dinner

Rise and shine! After an early breakfast you will drive down the steep path into the crater. The Ngorongoro Crater is the largest, unbroken and unflooded caldera in the world and it has an unbelievable diversity of wildlife. In addition to zebras and wildebeests, you might also spot the rare black rhino and other members of the Big Five. The crater is also home to other animals such as hyenas, waterbucks, bushbucks, eland and more than 500 bird species. After an extensive game drive and a picnic lunch you will leave the caldera in the afternoon and drive back to Arusha, where you will arrive in the early evening.
Breakfast; Lunch

How many travellers are in a group? 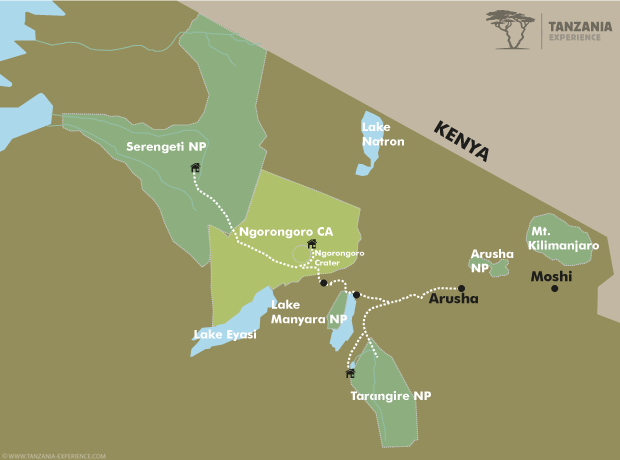 …As to Tanzania Experience, we always felt that the information we received from you before the trip or from Taher during the briefing were very professionally handled…Xavier and Carole | France