The African puff adder (Bitis arietans) is a snake that belongs to the family of vipers. It is a venomous snake and is found all over Africa from the north to the south. Their preferred habitats are savannahs and grasslands. They are not found in rainforests, deserts, tropical and alpine habitats. Puff adders are probably the most widespread and common snakes found in Africa.

The snake itself can grow to an average length of about one meter and is easily recognisable by its stumpy, robust build and large triangular head. The average weight of an adult puff adder can be up to five kilograms! Males are larger than females. The colouration of these snakes differs from region to region, but most have a distinctive collection of bands shaped like chevrons running down the full length of the body. In Tanzania, a lot of the puff adders have a more yellowish and black colour pattern, but of course even this is not a generalisation for the species. 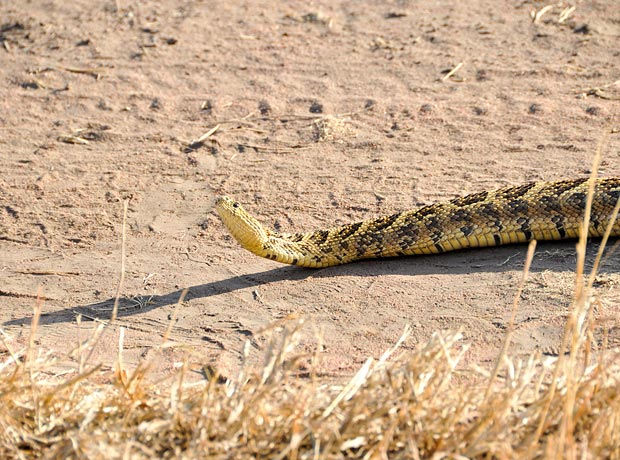 If you are wondering why they are called “puff adders” – well, the snake got this name from its behaviour when threatened: it will inflate its body and puff loudly which is perceived as strong warning by approaching animals. Puff adders are generally very sluggish animals and will not necessarily retreat from danger. This and the fact that these snakes are extremely good at adapting to pretty much any environment, is probably the reason that most snake bites in Africa are attributed to the puff adder, more than any other snake on the continent.

Puff adders do not move like other serpents, they move in a rectilinear motion, or in a straight line similar to the way a caterpillar moves. When threatened, it positions itself in an “S” position. This allows it to have maximum attacking distance should a bite be necessary. 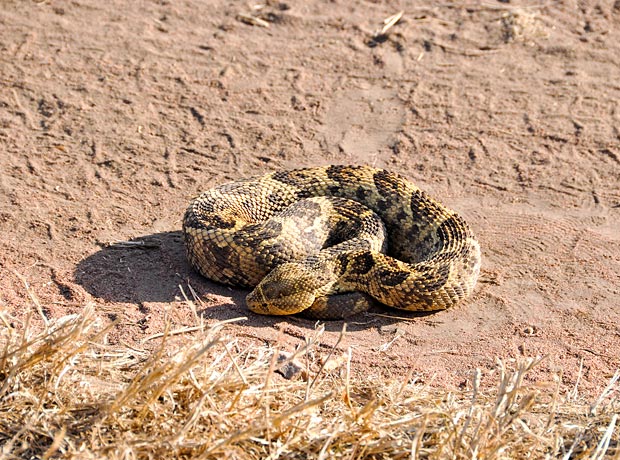 It is claimed, that even though the puff adders are so sluggish they are one of the fastest biting snakes in the world. The puff adders have front hinged fangs, which means that the fangs are unusually large and located at the front of the mouth. The only way the snake can accommodate these monstrous fangs is by having hinges, allowing them to fold away when not needed. The bite itself is very painful. They also deliver a deep bite which allows the cytotoxic venom to penetrate deep into the prey or enemy. The venom leads to severe swelling and cell destruction known as necrosis. If the bite is treated quickly, the chances of death are low, death usually occurs if the patient is not treated quickly enough and due to secondary infections!

Puff adders are mainly nocturnal and they prefer to ambush their prey rather than chase it. Their preferred foods are rodents, birds, amphibians and lizards.

Perhaps one of the most interesting things about puff adders is how they produce young. Unlike most snakes which lay eggs, puff adders give birth to fully developed live snakes. However, the process is quite deceptive. Eggs are actually produced, but are incubated inside the mother and the young snakes hatch inside the mother before being delivered. This is known as ovovivipary and is quite unusual within the animal kingdom. Giving birth to offspring this way is actually quite clever as it hinders the chances of the eggs being eaten by other animals. Maybe this is also a good explanation as to why these snakes are so successful in the wild and their number is constantly rising. Puff adders can give birth to up to 60 young snakes and the gestation period usually lasts up to over ten months. Young snakes are in some respect deadlier than their adult counterparts as lack of experience leads to them releasing a huge amount of venom when biting.

For a lot of people snakes are feared creatures and no one wants to see one or even get near one, but they are a very important part of the eco-system. Snakes have not changed in millions of years and they have fulfilled their place in the cycle of life with ferocious efficiency.