Tanzania has also been blessed with a variety of national parks and game reserves which are visited by large numbers of travellers from near and far every year. From elephants to lions and birds – there is something for everyone. With names like the world-famous Serengeti National Park, the Ngorongoro Crater or the Nyerere National Park (Selous Game Reserve), visitors are spoilt for choice. The annual migration of wildebeests, zebras and gazelles is an experience not to be missed. Furthermore Tanzania is a bird watchers paradise and boasts with over 1000 different species in different locations around the country.

Select the National Park or Game Reserve of your interest for more information: 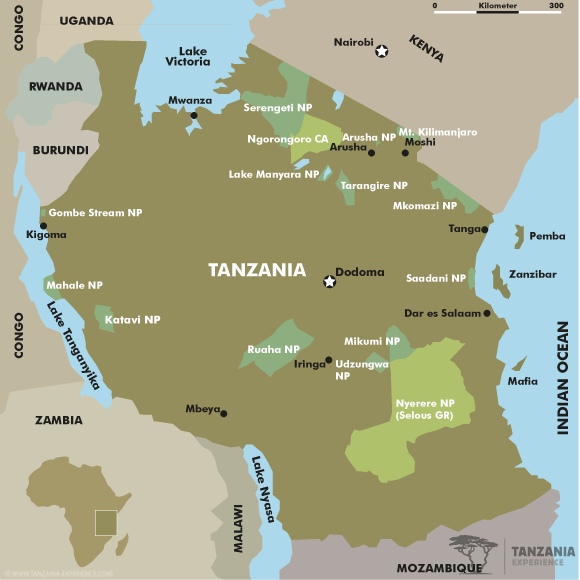 But Tanzania is not just about safari but also about the Indian Ocean and its beautiful beaches. To the east of the country lies the Zanzibar Archipelago, a group of islands and islets, that are dominated by the famous spice islands of Zanzibar (Unguja) and Pemba. Mafia Island is further south from Zanzibar and is said to be a hidden gem in the Indian Ocean. Watersport enthusiast can satisfy their every need and kite surfing, diving, deep sea fishing, kayaking and snorkeling are just a few of the activities on offer.

Here are some quick facts about the country:

Tanzanian cuisine is influenced by several different cultures such as Indian, Bantu and Arabic. The use of exotic spices, fresh coconuts and fresh vegetables will take your taste buds on a safari of its own!

Ugali: Maize flour is mixed with water to produce a thick, almost polenta type of dish. It is eaten on its own or served with curry, sauce, fish, meat or spinach. Although it might not be very tasty for visitors, it is definitely worth a try.

Chipsi Mayai: A rather interesting dish made of an omelet filled with chips, fried in a pan. Although it might sound like a weird combination, it is actually extremely tasty and very popular at fast food stands, that are found almost everywhere in the country.

Nyama Choma: Goat, pork, chicken or beef meat made on the barbeque, served with Ugali and lots of pili pili (a hot sauce consisting of tomato base and chilli) – a dish loved by the locals!

Bananas: Something so simple but yet a local favourite. There are more than 17 different types of bananas and several ways of serving them. Bananas are also the staple food of the “Chagga” – a local tribe in the Kilimanjaro area and they play an important role in the day to day diet. Popular dishes include, Mtori (mashed banana soup with meat), roasted bananas, Ndizi Nyama (bananas with meat stew) and grilled bananas.

There is also a nice selection of beers available in Tanzania and names include Tusker, Kilimanjaro, Safari and Ndovu.

Mbege is a traditional banana beer which is enjoyed in the northern part of Tanzania mainly by the Chagga.

Konyagi is found in Tanzania only and it is a gin like beverage – a must try for visitors.

Stoney Tangawizi is a soft drink, enjoyed by ginger lovers.