An encounter with an African rock python

For most people, snakes are on the list of animals “I do not want to meet”. Which I understand in some respect. Most visitors going on safari in Tanzania usually spend only a couple of days in the bush. Over the years, I have come to realise that most of them never get to see snakes in the wild.


By nature, snakes are masters of camouflage and in general they tend to stay out of our way because they would rather flee than encounter conflict. Most people see snakes in zoos where they have a nice big glass protecting them. You can observe them at a safe distance. However, I think it is an amazing experience to see reptiles like snakes in their natural habitats. You can really appreciate how they move, how they live and how they fit into the ecosystem.

One of the easily recognisable snakes in the bush has to be the African rock python. Its characteristics are unmistakable. They are the largest of the python species on the African continent and are amongst the largest snakes in the world. Rock pythons can grow up to a whopping 4.5 metres and can weigh up to 50 kilograms. If you know a thing or two about snakes, you will know that the rock python like its fellow species are non-venomous. They kill their prey by means of constriction. Being able to feed on anything smaller then themselves, pythons usually eat large rodents, small antelopes, crocodiles, baboons and monkeys.

The second encounter was a little bit closer than expected. I was on safari in the Serengeti National Park. The day was taking its course and we were adding more and more animal sightings to our list. It was around lunch time and we decided to head towards the picnic area.

We were on the lookout for animals as usual, until we got to one of the waterholes near the Seronera area. We saw one car that had stopped and we stopped behind them to have a look. As we arrived, we could see the tip of a tail disappearing into the bush at the side of the road. Hmm, we all asked ourselves, what was that?

As we sat and discussed, out of the blue a rock python came out of the bush right next to our car! 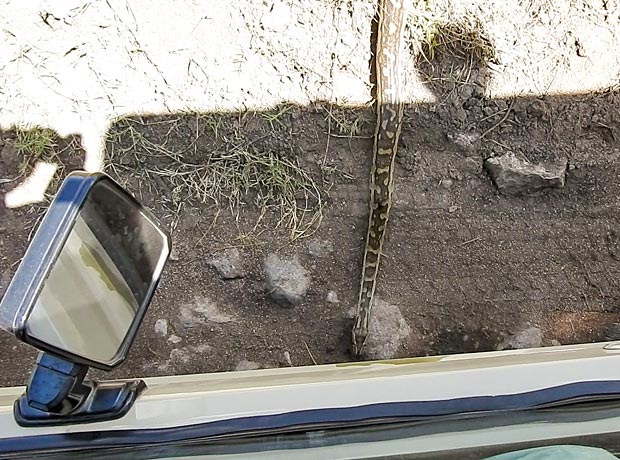 Before our driver-guide could even move, the snake was under our car. He asked me to see if the snake came out on the other side. I looked, at first I saw nothing, but a few minutes later the python popped out from the other side of the car and disappeared into the bush. Amazed we just sat in awe at what we had just experienced!

Our guide told us that a few years ago, another group had had a similar encounter: a python went under the car; however, it did not come out on the other side! It took the rangers a few hours to get the snake out from under the car. We were happy enough to see this mysterious creature grace us with its short presence.