Lions in a dilemma in Tarangire National Park

On a recent safari, the journey took us to the Tarangire National Park. The dry season in Tarangire is by far one of the best times to visit the park as all the animals flood to the park where they have enough water and food.

Like in the Serengeti, Tarangire also has its own migration. Thousands and thousands of zebras and wildebeests spend the whole year migrating to and from the park. Usually during and after the rainy season water is plentiful all around, meaning that the large herds are not dependant on the Tarangire river. However, grazing becomes an issue. After the rainy season, the grass in the park is not nutritious enough for the lactating ungulates who need to provide rich and healthy milk for their young. This is one of the main reasons why you will hardly see wildebeests or zebras between January and June and even elephants tend to move away.

Another disputed reason as to why the herds leave the park in the rainy season is due to the soil. A lot of the ground in Tarangire is made up of black cotton soil which is said to cause hoof disease among the ungulates and that is why they prefer to stay away from the park.

I was there in August and one could clearly see that thousands of wildebeests and zebras had returned to Tarangire for the water and to feed on the abundant grass.

Predators such as lions on the other hand, cannot migrate as easily as herbivores. They have territories which have to be guarded and protected. For the resident prides it is therefore always a joy to see the large herds returning as this signals the long wait for a buffet is over.

As we drove around we headed towards a large watering hole near the public camping area. Before we even arrived, we could already see a large number of zebras and wildebeests heading in the same direction – to the water. 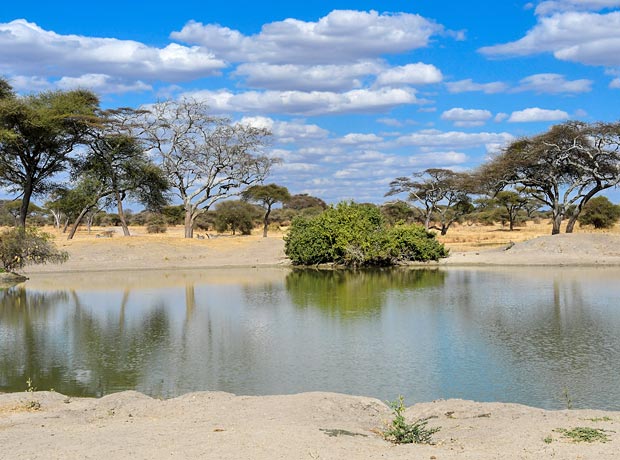 By now the midday sun was at its highest point and the heat was brutal. We could sense the urgency amongst the wild animals, who desperately wanted to drink. But as we reached the water hole we realised something was not right. There were thousands of animals just hanging around but none were drinking. A quick survey of the surrounding area revealed the reason for the jam – lions. 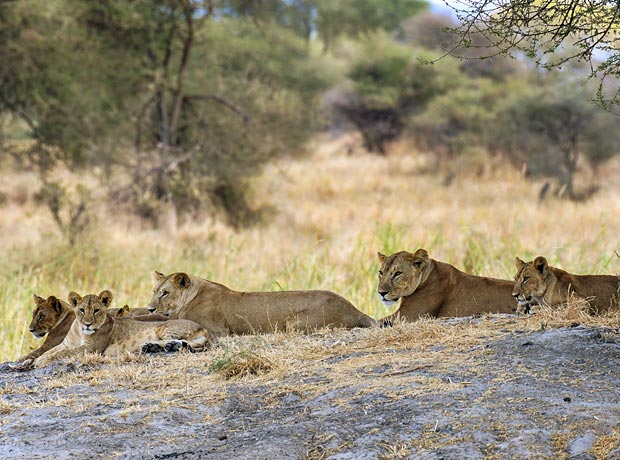 Some six lions were on the other side of the water hole and in quite a dilemma. The herbivores had spotted them and were not moving. The lions seemed quite hungry and you could tell that the cats were trying to make a plan but could not move as this would certainly mean no lunch.

The standoff carried on for almost an hour but eventually the herbivores could not hold off their need to drink and slowly and bravely made their way to the water. Cease fire between the two groups was agreed and the herds flocked to the water for a refreshing drink. Now and then the herds would forget that the lions were there and would venture quite deep into the water after which they would catch wind of the lions and erupt in a mass of water, mud and hooves. The show went on and on. 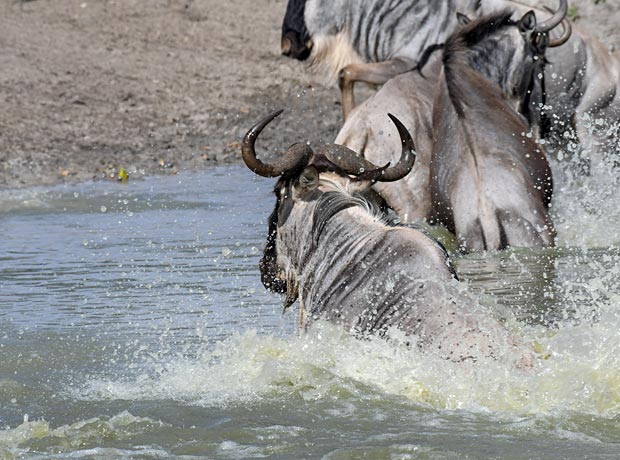 I guess for now, the lions had decided to watch the herds and share the water with them. The next morning as we came back to the same spot, we saw that the lions had spread out in the long grass and I later overheard a guide saying that the pride managed to get a zebra in the afternoon.

It is moments like this, when animals co-exist with each other with trust and harmony in desperate times, that I really appreciate.