The Tanzanian Cheetah – an endemic cat

There is a total of five subspecies of cheetahs around the globe. One of those is known as the East African cheetah or Tanzanian cheetah and it can be found in Tanzania, Kenya, Uganda and Somalia. However, the best places to see them are the Serengeti and the Maasai Mara, where the majority of the population lives.
Archaeologists found remains of a cheetah in the lower beds of the Oldupai Gorge in northern Tanzania which date back to a few million years ago, making the Tanzanian cheetah the oldest of the subspecies.

The Tanzanian cheetah is not only the oldest, but also the largest of the subspecies, average sizes range between 200 and 220 cm in length and a weight of 40 to 60 kilograms! In terms of colour, the Tanzanian cheetah, after the Northwest African cheetah, has the palest colouration. The coat ranges from white-yellowish to a tannish coat. The many spots on the coat can be found all over the body, even on the tail. Towards the end of the tail these spots merge into rings and finally at the tip of the long tail is a white tuft. 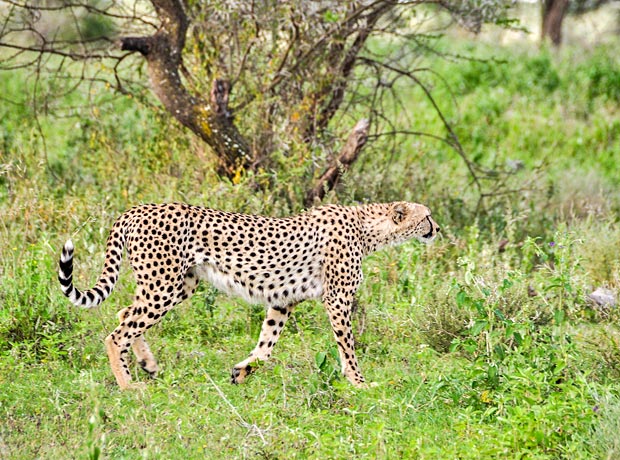 One of the most iconic features of a Tanzanian cheetah has to be the dark tear marks, which run from the corner of their eyes all the way down to their mouth. These tear marks play a vital role for the cheetah. They help to reflect the glare of the sun when they are hunting during the day. Some say that these marks also act like the sights of a rifle, to help the cheetah aim and stay focused on the prey that they are hunting.

So where can you find the Tanzanian cheetah? As their names depict, they are endemic to Eastern Africa. Their preferred habitats include savannahs, grasslands, open fields and steppes. Between 500 to a 1000 wild Tanzanian cheetahs can be found in the Serengeti National Park, although some figures claim that nowadays an even higher population can be found in the Maasai Mara in Kenya. These cheetahs are listed as vulnerable by the International Union for Conservation of Nature (IUCN) and the main reason for this is that they are threatened by predation, habitat loss and cub mortality which in places like the Serengeti can be as high as 90%! 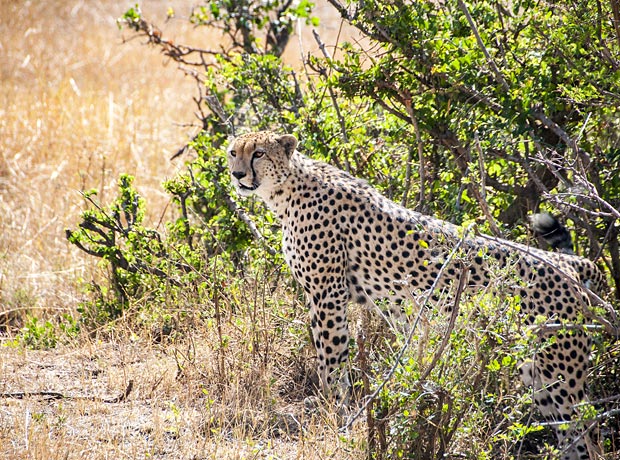 The Tanzanian cheetahs main diet includes Thomson and Grant’s gazelles. Larger animals like impalas, wildebeests and topi antelopes are usually hunted by a coalition of males. Single females tend to prefer smaller antelopes. On occasion, cheetahs will also hunt rabbits and hares. Cheetahs are known as the fastest land animals in the world. In just a few seconds and a few strides they can reach speeds of up to 100kilometers per hour and more! They also have manoeuvrability on their side, the long tail acts like a rudder which aids them to execute extremely quick turns when chasing prey and they also have semi retractable claws which give the cats traction at high speed. Tanzanian cheetahs prefer to hunt early in the morning and if need be then during midday. After catching their prey, they usually eat as quick as possible to avoid conflict with other predators.

In terms of socialising, females tend to live solitary lives whereas the males form groups known as coalitions. These coalitions are not always made up of brothers from the same litter and on occasions males will join other coalitions. The territories of females can be huge and the males try to set their home range amongst other females to insure a higher mating chances.

Mating can occur throughout the year because cheetahs are induced ovulators. The gestation period lasts for about three months after which four to eight cubs are born. The cubs are extremely vulnerable and stay hidden in thick cover for the first month. The mother moves her cubs every few days to prevent predation.

Cheetah cubs look so funny when they are young, like punk rockers they have a Mohawk styled mane which eventually fades away as they get older.

The Tanzania cheetah is a truly beautiful creature, which has perfected its niche and it is always a great reward to see them in the wild.