The Black-headed Heron a feisty eater

The black-headed heron is, as its name states, a member of the heron family. These birds are fairly large, standing at 85cm and have a wingspan of 150cm. Their preferred habitat includes open grasslands, wetlands, swamps and marshes. However, they are ever adapting and one can find them also in towns and on farms near settlements.

Breeding usually occurs in large colonies during the wet season and sticks are used to build a bulky nest high in trees, in reeds or marsh beds where after the females lay between two and four eggs.

Black-headed herons also have a characteristic way of flying; their necks are retracted in flight. This is distinctly different from storks and cranes which fly with their necks extended. In terms of food, these herons are exceptional hunters being able to stand motionless waiting for their prey to come to them or they can also stalk with great success. They feed on both aquatic and terrestrial insects as well as snakes, spiders, frogs and smaller mammals like mice and birds.

I recently saw a black-headed heron in the Seronera area of the central Serengeti. It looked like it was struggling with something but it was hard to tell exactly what it was busy with. It became quite clear what was happening once we got closer… 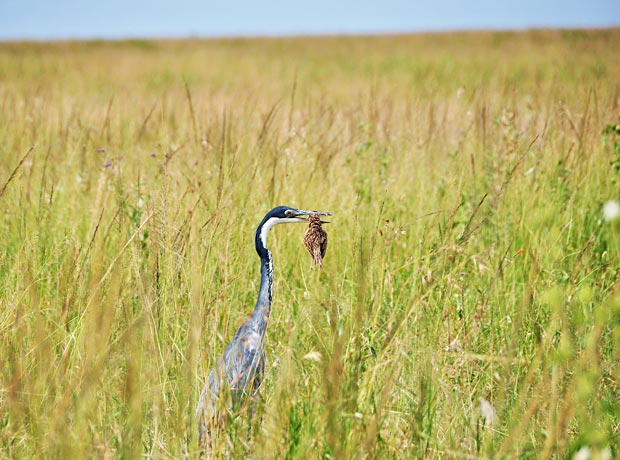 Somehow the heron had managed to catch a bird. (I could not accurately identify the bird, but my guess is that it was a type of lark.) We watched in awe as the heron struggled to get the bird down its throat. What made it even more difficult was the fact that the prey was not yet dead. After struggling for some 10 minutes, it seemed to be exhausted and decided to take a break. 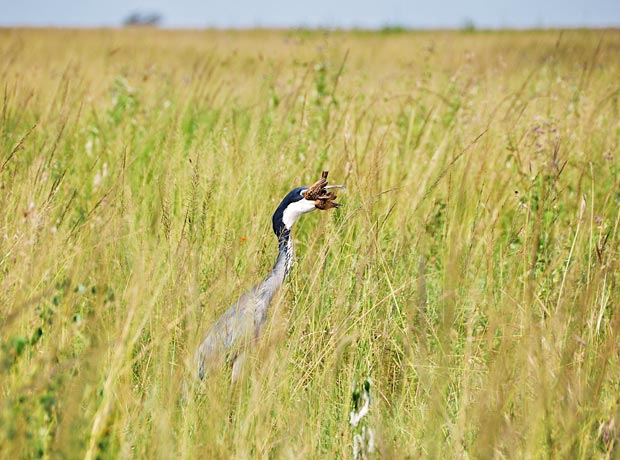 I had heard from guides that herons do prey on other birds, but I always found it hard to imagine. Well, now I can say that its true.
Once again the Serengeti managed to surprise me with something new.

PS The heron eventually flew away without his meal…