A day on the banks of the Mara River

The Serengeti National Park is one of the most magical places one can visit. It is diverse in both flora and fauna and home to one of the largest and greatest animal migrations on this planet.

Covering some 14,750 square kilometres, it accommodates different vegetation zones. In the south, you have flat, seemingly never ending plains, the west is made up of riverine forests and swamps, the central part is the heart of the park and a great place to see big cats. Then you have the north, which is home to the Mara and Bolongonja Rivers.

There are also plenty of mountains in the north.

Depending on the season and whether you want to see the big migration, you will stay in different areas of the Serengeti National Park. While the movements of the big migration could be predicted rather reliably in the past, the change in climate also changes the habits of the millions of wildebeest and zebra migrating in search of food each year. This year, the migrating herds headed towards Kenya in July, whereas usually they would have headed up only in September or October.

Last September, I was out with a family on a 4-day safari in the north of the Serengeti where we had a truly amazing time. On our first full day in the Serengeti, we drove up to Kogatende area to get closer to the Mara River and the animals. We were greeted by thousands of wildebeests and zebras on both sides of the river. 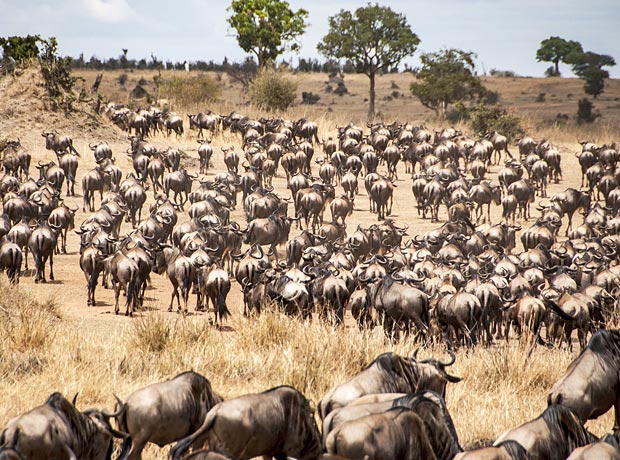 One of the first things people usually picture when thinking of the big migration is the frenzy of wildebeests crossing the crocodile infested Mara River. This was exactly what my group was looking for as well. So, we scouted for possible crossings.

Although there were thousands of wildebeests in the area, it seemed as if they were all just hanging around and contemplating whether it was worth crossing the river. Lack of rain that year had resulted in low water levels in the Mara River. This should have made it easier for the herds to cross. But don’t ever expect a wildebeest to do what seems logical to a human. They have their own way of thinking. None of the wildebeest made any sign of even considering to cross the river.

The day quickly drew to an end and we headed back to camp.

The next day, we headed back to the Mara River and luck was on our side: we witnessed several crossings from all different angles throughout the day! It is such an amazing experience to see these large herbivores overcome their fear and swim across. 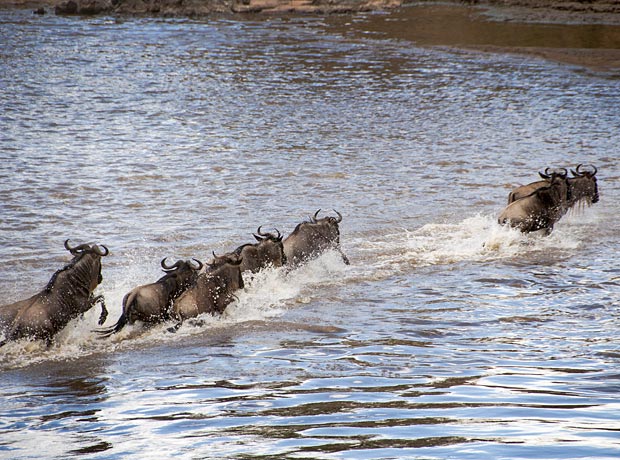 The Mara River and its crocodile assassins are responsible for thousands of animals perishing each year trying to get across to the other side just to taste that fresh green grass. It may look cruel to us, but we must let nature take its course. She knows best.

We also went on a balloon safari which was an experience beyond words. Our pilot flew the balloon over the Mara River and at one point brought it down so low that we almost landed on a hippo’s back.

The Mara River is truly a spectacular place!