There are eight types of baobab trees in the world, of which six are in Madagascar, one in Australia and one on mainland Africa. The species found in Tanzania is Adansonia digitata, the largest of all eight. One of the best parks in the north to see them is the Tarangire National Park. I like to call it ‘the Baobab garden’.
In the south of Tanzania, Ruaha National Park is where you can find beautiful baobabs.

These trees have adapted to their habitat and are able to withstand long periods of drought. In the peak of the dry season a baobab is able to store up to 100 000 litres of water inside its structure.
The size of the tree varies, it can shrink and expand depending on its needs. In the dry season the trunk shrinks and when water is abundant, the trunk expands to support more water storage.

Being so massive you would think that these trees are almost indestructible, but there is another giant in the bush that can cause great damage; the African elephant. Elephants know that baobabs store water and especially in the dry season when water is scarce they look for baobab trees to quench their thirst.
The bark of the baobab is soft enough for an elephant to poke a hole in the bark. Then it is easy to start ripping the bark off. Once this protection is gone, the elephant has access to the best part – the inner part of the tree. This part is like a sponge – rather like a watermelon. Chewing on the flesh can quench an elephant’s thirst.

It is incredible to see just how fierce elephant herds can be when feasting on a baobab. I have seen baobabs in the Tarangire with a holes right through them. Of course the elephants have to be careful when munching on the baobabs; I have read reports of elephants being killed after trees fell over.
If left to recover, the baobab can re-generate its bark, but when damaged too severely, baobabs deteriorate very fast to a pulp.
Still, driving around Tarangire you will find countless trees that bear the scars of thirsty elephants.

I remember once on safari, we came across a herd of elephants who had made a huge hole in the side of a baobab tree. As we arrived on the scene, all we saw was the butt of a big elephant sticking out of the tree. 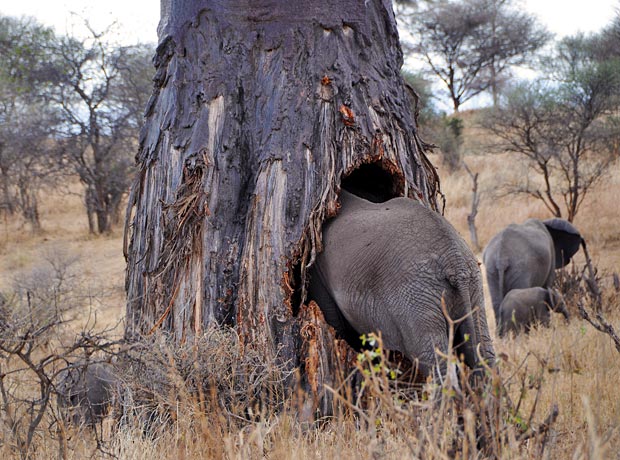 Or, it also looked like the tree was eating the elephant – just depends on the perspective!
It was incredible to see what power and determination elephants have. 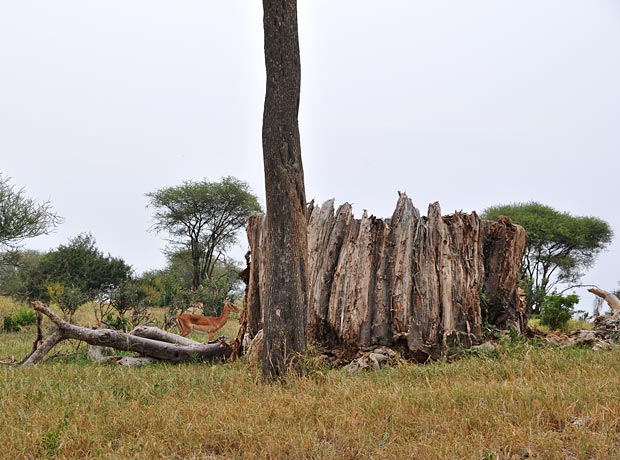 That particular tree did not survive, I realised soon after. We returned a few weeks later to the same spot: the tree had vanished.