The African elephant is the largest land-walking mammal on our planet. Some of the larger bulls can easily weigh 5tons, if not more. These massive animals are incredibly clever and have a strong social bond. Famous for its elephants, Tarangire National Park is one of the best places to see these giant and humble animals – especially from July onwards.
However, they can be seen quite easily in most of the parks in the northern circuit of Tanzania pretty much all year round. Generally, on safari in the national parks of Tanzania, elephants are quite relaxed, allowing vehicles to within a few meters from them.

When observing elephants on game drives, I am always amazed at just how quiet these heavyweights can be. Apart from the noise from the breaking of branches and the occasional stomach rumble you hardly hear a thing. For me, this gives them a very peaceful character.
This does not mean that elephants are harmless; if provoked they can show you a different side. They are immensely powerful creatures and will do anything to get rid of a threat to themselves or younger members of their herd.

Young bulls tend to be more naughty and aggressive as they are the ones that usually charge. Maybe their lack of experience clouds their judgement or they want to show off their strength? Whatever the case, bulls go through a phase known as musth. Some say it is caused by females in heat, but others say that the bulls experience this when determining dominance in a bachelor herd. During this time bulls are extremely aggressive and have short tempers due to the elevated levels of testosterone in their bodies. Competition at times of musth is very high and the bulls fight each other to claim dominance. These fights can get brutal to the point that sometimes the defeated elephants succumb to their injuries.
When females are in oestrus they call out the males, who search out the females to mate. The females choose which bull is allowed to guard her and in turn the bull gets mating privileges. You can tell that an elephant is in musth because of a dark liquid secreted by the temporal ducts on the side of its head. This secretion is called temporin. 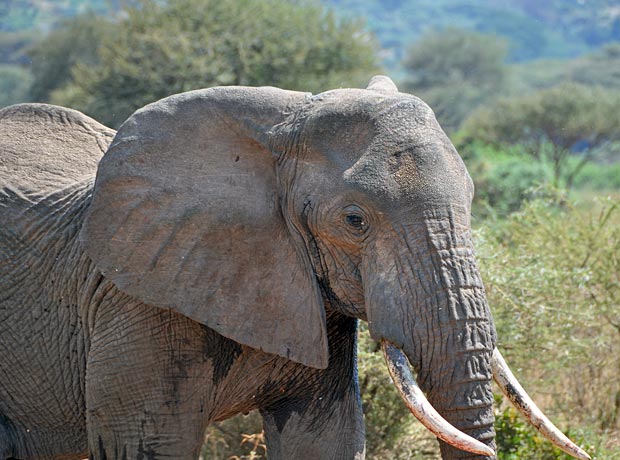 I was on safari in Lake Manyara National Park a while ago when we witnessed the aftermath of such a fight. We were driving near the lake and spotted a bull elephant who was running very quickly. He was limping so we knew something was not quite right. The bull was a few hundred meters in front of us but as he disappeared into thicker cover, we saw that he was bleeding severely from his rear. At this point we had parked our car and were wondering what had happened to the bull. Before we knew it, out came another bull, following the same path as the other bull. As he came out from the bushes and saw us, he charged. Our guide had turned off the engine so we had to sit in silence as the bull charged, stopping 2m from our car. 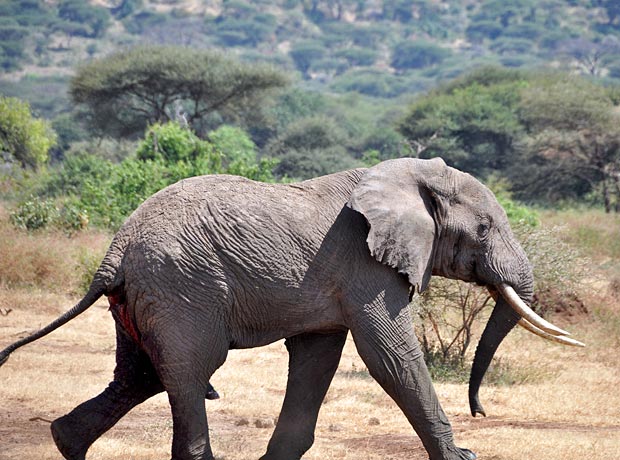 It was a close call and after everyone had caught their breath and I looked at some of the images, it was clear what had happened. One of the tusks of the bull that charged us was covered in blood. He was in musth. The two bulls must have had a vicious fight and as the defeated bull ran off, the more dominant bull followed!
Thinking about it later I imagined how rough the fight must have been. We reported the incident to the park rangers in the hope that they would check up on the injured bull.