In total there are 6 flamingo species in the world, 4 of which occur in North and South America. The remaining 2 species, the lesser and greater flamingo, are found in Europe, Asia and Africa including Tanzania.

Lesser flamingos are the smallest of the family but also the most numerous and flocks of up to 2 million have been reported. Their standing height is between 80 and 90 cm and they can weigh anything between 1.2 and 2.7 kg.

Flamingos are one of the most unique but yet well-known birds. They are tall and elegant, with long necks and thin long legs. The plumage of both species is mostly pink. Greater flamingos are however a little paler with red wing coverts and black flight feathers. 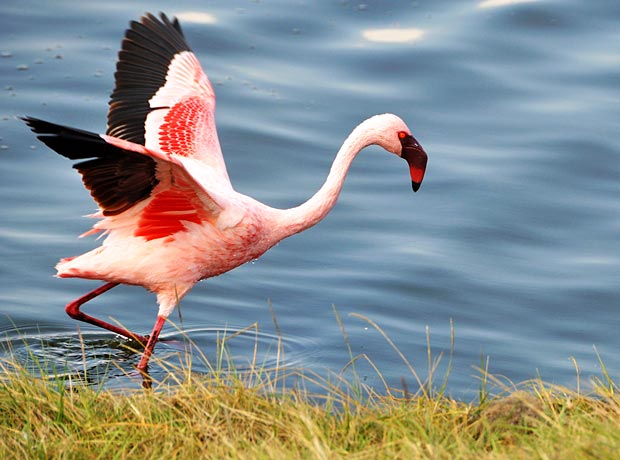 Flamingos are waders, which means that their preferred habitats are shallow lakes, lagoons and wetlands. In Tanzania one of the best places to see flamingos is at Lake Natron.

These birds are specialised feeders and their diets mainly consist of algae, plankton, crustaceans and brine shrimp. Their bills have a filter system which allows them to separate waste from food and feeding is done with their heads upside down! Lesser flamingos primarily feed on an algae called spirulina which only grows in very alkaline lakes. If you have ever wondered why flamingos are pink, the answer is the algae they eat turns into pink pigment which in turn gives them a pink colour.

Flamingos are very social, that is why you hardly ever see them alone, but rather in huge flocks – sometimes numbering tens of thousands. Courtship rituals are very important and breeding groups will separate from the flock to take part in a beautiful synchronised display. Head flagging, wing salutes and marching all assist in producing hormones which then again help assuring a higher number of breeding pairs. 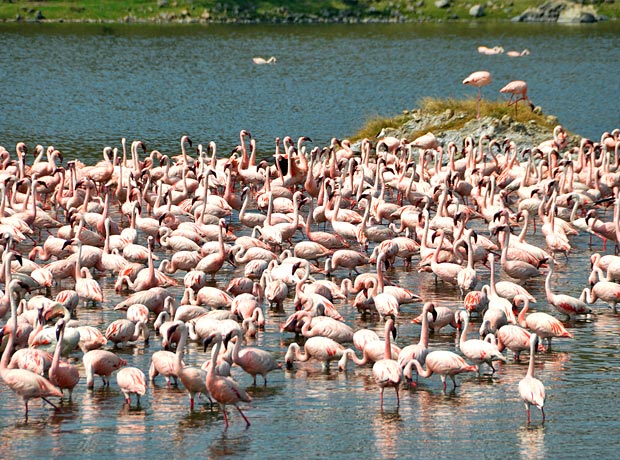 Like all flamingos, the lesser and greater both lay a single egg on a mud nest. These mud nests are built by both males and females. The mounds can stand up to 50 cm tall and they have a concave shape to stop the egg from falling out. The reason for the nest being built so high up is to protect it from flooding.

After hatching, both the male and female feed the chick a milky liquid called “crop milk”. After a week the chick leaves the nest to join a “crèche” – a group containing of up to a few thousand chicks being looked after by a few selected adult birds.

How often is it, that when you see a flamingo it is usually standing on one leg? Everyone has a theory about why they do this but nothing concrete has been proven. One of the possibilities is however, that this posture helps optimising heat loss in the bird. Whatever the case may be, they are very good at balancing.

In Tanzania, flamingos can be found in the Arusha National Park at the Momella lakes, at Lake Manyara, Lake Natron, Lake Magadi in the Ngorongoro Crater and at pretty much all the other alkaline lakes on the northern circuit. Nothing beats seeing a huge flock of flamingos flying over you in sync.