A sand storm on the shores of Lake Natron

I recently went out on a camping safari with a group of guests and our journey took us to the dry and extremely hot Lake Natron area. Lake Natron sits below the Gregory Rift which is a branch of the East African Rift Valley. The lake itself is massive, stretching some 57 kilometres long and 22 kilometres wide.

The lake is known as a terminal lake, meaning the water that enters does not flow out elsewhere.

By the time we got to the campsite, the midday sun was absolutely blistering. At one point, I held out a thermometer in the direct sun and within a few minutes it read 55 degrees Celsius! It is always astonishing to me to see how the Masai live in such a – to us – hostile area. That afternoon, we headed out with our guide to the nearby Ngare Sero waterfalls. The trek to the falls was both scenic and refreshing; every now and then we had to cross the cool river which at 40 degrees was very pleasing indeed. It took us about an hour to get to the waterfall. I was so amazed to find wild palms and green vegetation growing in what felt to me like a desert.

By the time we got back from our waterfall walk, it was already way past five and our guide drove us to the shores of Lake Natron. The lake is known as one of the most important breeding areas for the lesser flamingos, which flock to the lake in millions. 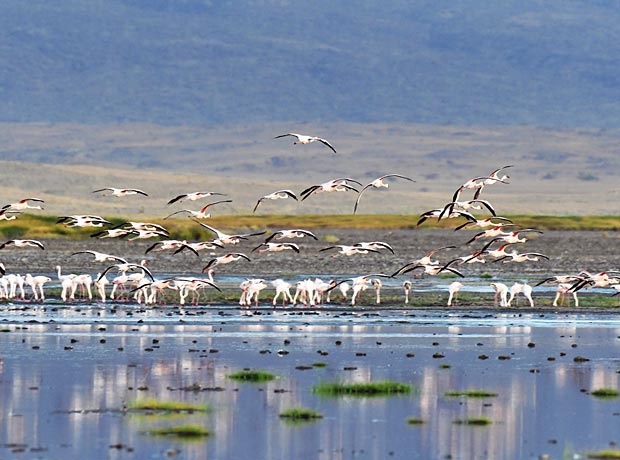 You could tell that the dry season had hit the area quite hard, as most parts of the lake were dried up. The parts that would usually be submerged were now accessible on foot.

We got out of the car and our guide agreed we could try to get a closer look at the flamingos. The light was absolutely magical; the sun was slowly setting behind the rift valley and there we stood on this wide-open expanse of the lake. The flamingos were very active, flying around. We had to walk for almost one kilometre to see them up close. We all managed to get some nice pictures and started to head back towards the car. 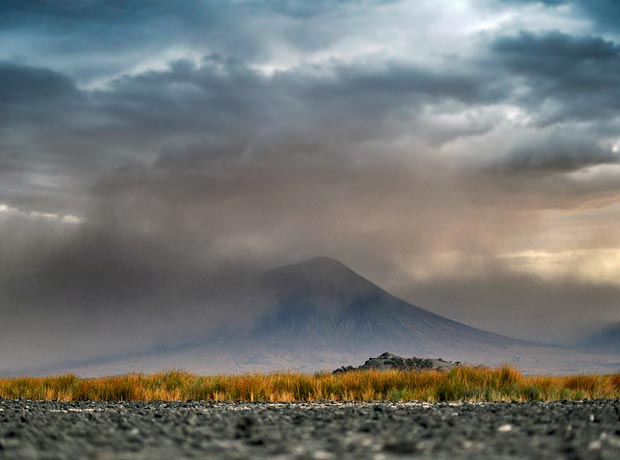 On the way back to the car, we realised that we had been focused on the flamingos that we had not noticed the huge dust storm building up behind Ol Doinyo Lengai, The Mountain of God. We watched in awe as the clouds got darker and the dust rose higher, slowly edging closer and closer to the mountain until it was completely engulfed in dust. We felt like actors starring in an end-of-the-world action movie! Our guide signalled to us to get out of the lake in case the rains would start. We didn’t need to be told twice and made for the car. 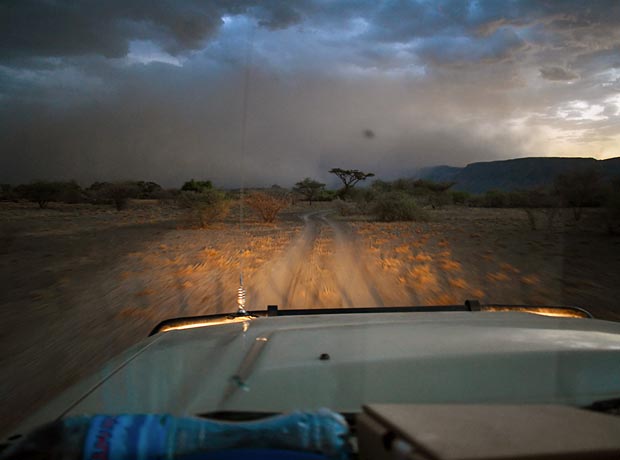 Heading back to camp we could barely see, the dust storm had reduced our vision to just a few meters; the surrounding mountains had disappeared, all we could see was dust. Back at camp, the strong winds made it unbearable to stand outside and we all went into the restaurant to find cover and reflect on what we had just witnessed! The next morning broke with blue skies and once again scorching temperatures. As if nothing had happened.