A herd of elephants and the dying zebra

During the month of August a few years ago I was on a game drive in the Tarangire National Park. Apart from the numerous herds of zebras and wildebeest, we also came across plenty of elephants. As we neared one of the watering holes we noticed a lot of commotion in a herd of zebras. A little bit confused as to what was causing it, we went to take a closer look.
On arriving we realised that one zebra was on the ground, struggling.
It was difficult to tell what was wrong with the zebra, but it was not doing well. Looking at its body it was definitely healthy – if it was very sick then it would have been very skinny and weak. We realise it was serious when we saw it started coughing up blood. Our guide mentioned that it might have been bitten by a snake.

As this was unfolding, a herd of elephants approached the dying zebra. Alarmed by the other zebras we could see that the elephants were very cautious. The herd quickly surrounded their young as one of the older females went to investigate. 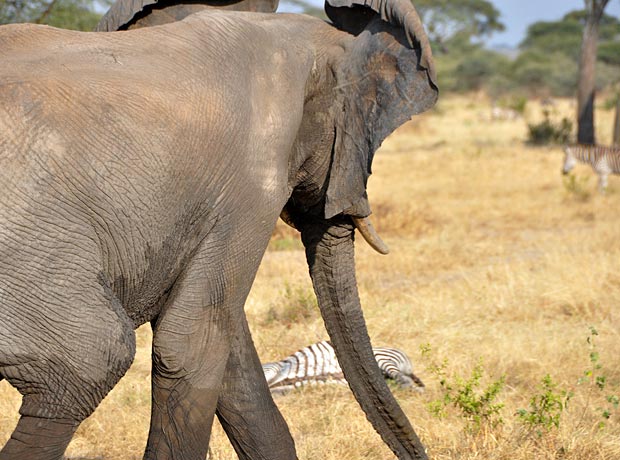 The elephant slowly edged closer to the zebra with her ears out, making herself as big as possible. Before we knew it she started to charge the dying zebra. She did this a few times before regrouping with her herd. The elephants moved in a circle around the zebra and went for a drink. At this point the rest of the zebra herd started to move off, knowing that they could not do anything to help their friend.

After the elephant herd had finished drinking they passed the zebra who by now seemed to have had its last breath. Some of the younger members of the herd were still not satisfied with the situation and started to charge relentlessly at the zebra. They soon lost interest and moved on. 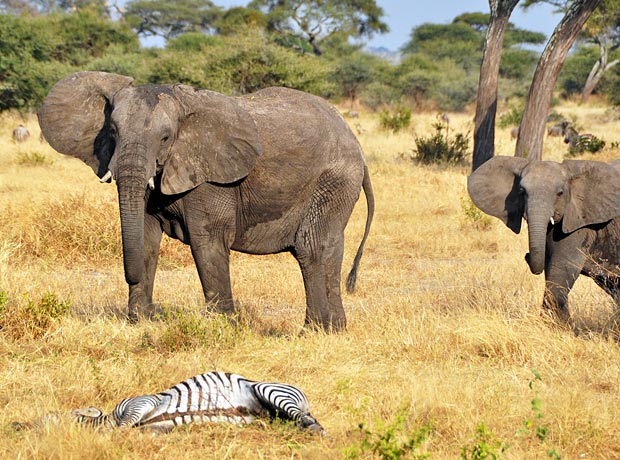 We sat and watched for a while, as the vultures already started to circle high above the sky, knowing that they were in for a treat. It is unfortunate to see such things but it is always a reminder to just how harsh life in the bush can be. It truly is a fight for survival and each creature out there is grateful to see the sunrise each morning knowing that it survived another night.