Home//Travel Tips//Mt Kilimanjaro, the Roof of Africa: Which route to the summit? Part I Marangu & Rongai Routes
Previous Next

Mt Kilimanjaro, the Roof of Africa: Which route to the summit? Part I Marangu & Rongai Routes

At 5,895 m, it is the highest mountain in Africa and the largest free-standing volcanic massif in the world – Mt Kilimanjaro. This huge mountain cone stands majestically above the wide plains and offers picturesque views of the endless savannah all the way to Kenya. I will share the pros and cons of the four ways to the summit and their special features. Today: the Marangu and Rongai routes.

The different routes to the top lead over grassland into the species-rich forests inhabited by Colobus monkeys, up into a heather and moor landscape to reach the alpine and glacier zone. The top of the massif, the Roof of Africa, is not only accessible to experienced mountain climbers. Even people like me, who actually only associate ‘steep passes’ with football, have the best chance of “just” climbing the summit with a certain level of athletic fitness. And let me tell you: I thank myself that I did that. 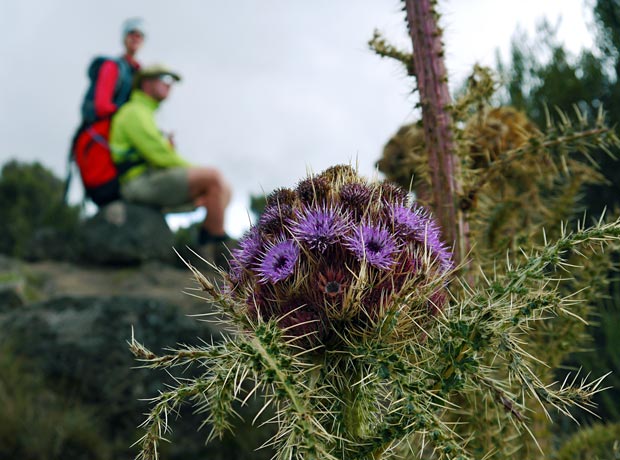 A Kilimanjaro tour is a special experience, especially for inexperienced summiteers, because, apart from the fight with your weaker self, you are served the whole package of a mountain expedition: a team with a mountain guide as well as cooking and porter staff. All locals who know the mountain, know the difficulties of a multi-day ascent, and always have a motivating smile and a few words of encouragement ready. And you usually get to know nice fellow travelers as well.

Which route to Kilimanjaro’s summit: The Marangu Route

Well-developed paths and a balanced elevation profile make the Marangu Route the supposedly easiest route of the four ways up to Uhuru Peak. It is therefore often called the “Tourist Route” or the “Coca Cola” route. As a “soft drink”, Coca Cola suggests that the route is good for “softies”. This assessment apparently attracts a large number of unprepared tourists. That in turn may be one of the reasons why this route has the lowest success rate of all routes. So be careful: this path also has its pitfalls.

Another reason for the lower success rate could be the shorter acclimatization time, as on this route the top can be conquered after 5 days, while other routes take at least 6 days. The Marangu Route starts not much higher (at a little over 1860m) than, for example, the 6-day Machame Route (approx. 1828m). It is therefore advisable to plan an additional night on the way up to the summit.

The Marangu Route is not only popular because it allegedly is shorter and easier. It is also the only route where you spend the night in simple mountain huts instead of tents. It is therefore ideal for those who prefer to leave camping to the children. But that doesn’t make it any cozier: All huts are multi-bed huts with 70 beds in the Mandara huts, 148 in the Horombo huts and 58 in the Kibo huts. Privacy – nonexistent. Snoring guests – guaranteed. Bad sleep – well possible. 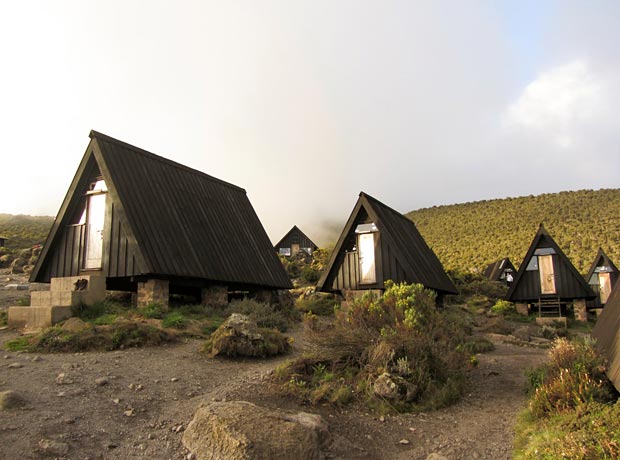 The Marangu Route is also the only route that takes the same track there and back. Only between the Horombo and the Kibo hut there are two different paths. So talk to your guide to take one way up here and the other down there. But one thing remains inevitable: uphill, with your increasingly exhausted facial expression, you constantly look into the happy faces of those who have already passed the pain and are now heading straight for a hot shower and a cozy bed. Downhill you will have a smile on your face and be twice as happy about your success.

The landscape is a bit more monotonous here than on other routes. Nevertheless, there are beautiful prospects. Especially those who book the extra night have the opportunity to make a leisurely day trip to the Mawenzi campsite. From here you have wonderful views over the saddle to Kibo, one of the 7 peaks of Kilimanjaro.

Which route to Kilimanjaro’s summit: The Rongai Route

The Rongai Route basically enters Kilimanjaro through the back door. So the approach goes around the mountain on its back, near the Kenyan border. At the beginning of the ascent, you also have a good view of the Kenyan plateau for the first few days. Even those who have not yet been to Kenya can then fairly claim to have already seen Kenya. The view even extends as far as the Amboseli National Park. But please don’t get your hopes up of spotting any lions at this distance. For this you should rather book one of the many possible safari tours in Tanzania after climbing the mountain.

The back of the mountain is less rainy. Nevertheless, it also goes through forests that are home to colobus monkeys. In addition, the climate increases the chance of having a cloud-free view of the Kibo and Mawenzi peaks more often.

On this route you also benefit from the fact that it is not very busy. This emptiness and a little bit of luck even allow encounters with buffalo and antelopes. In addition, the ascent begins relatively flat. So you get used to walking first before it gets steeper. Ultimately, you have to somehow make it up to the Roof of Africa on this route as well. The standard route takes 6 days and thus meets the minimum requirements for a promising acclimatization. And as on all other routes, the ultimate “summit attack” begins around midnight, when it is dark and cold, and you are tired. 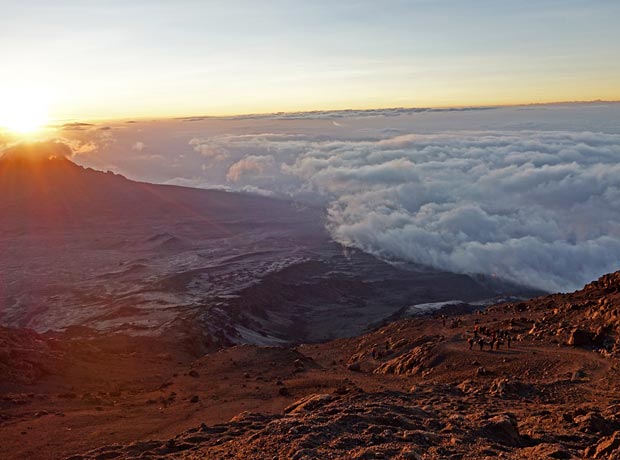 Only when you are near the summit do you finally come across people who are going up the other routes. But in the wake of the larger community you will certainly be drawn to the top more easily. The way back to the hotel then takes the Marangu Route. This way you will continuously get new impressions of your Kilimanjaro experience. However, this does not mean a change from staying in a tent to overnight in a hut. But who wants to spend the last night on the mountain in a crowded dormitory even after days of seclusion?

Climbing Kilimanjaro is a formative and an unforgettable experience. High up on the Roof of Africa, you have not only conquered the highest mountain in Africa, but also have the continent at your feet. Facing the special physical and mental challenges is always worthwhile. We are happy to answer any questions and support you in planning your Kilimanjaro conquest. Here on site, we are always well informed about the current situation. So, get in touch with us! Your dream, our expertise – your very own Tanzania experience.