The Rock Hyrax – The Elephant’s Cousin

The rock hyrax (Procavia capensis) is one of four living species of the Hyracoidea family. Their habitat is limited to Africa and the Middle East. At first glance a hyrax looks similar to a guinea pig. Adults can reach up to 50 cm in length and can weigh up to 5 kg. Their entire body is covered in a thick brown / greyish fur which differs in colour depending on the area they live in. 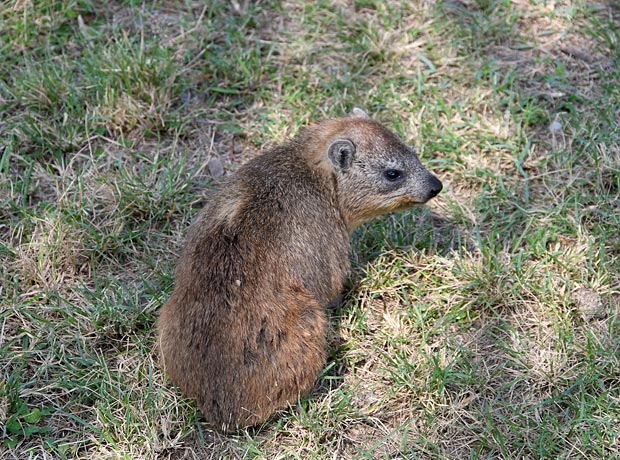 Probably the most unique feature of a hyrax is its dorsal gland that allows it to excrete odour which is used for marking territories and social communication. These glands are most easily seen on dominant males.

Whenever I tell someone that the hyrax is related to the elephant, they tend to look at me as if I were joking. But the truth is, they really are related. However, hyraxes don’t only share unusual characteristics with elephants but also with sirenians (dugongs and manatees).

So what are these unusual characteristics? Firstly, male hyraxes lack a scrotum and their testicles are tucked away in the abdominal cavity next to the kidneys – same goes for elephants, manatees and dugongs. Female hyraxes have a pair of teats near their arm pits like elephants but in addition they have four more in their groin area. Like elephants, hyraxes also have tusks growing from their incisor teeth. In other mammalian species, tusks grow from the canines. Another characteristic that hyraxes share with elephants is that they have flattened hoof-like nails on the tips of their toes rather than the curved claws seen on other mammals.

As their name suggests, rock hyraxes live in rocky habitats. In Tanzania they are found in the Serengeti where they dwell in an around the several kopjes of the park. They have adapted to the terrain and their feet are covered in a soft rubbery pad. Thanks to several sweat glands, hyraxes have plenty of traction that allows them quick and stable manoeuvring over rocky and steep ground. And although you can sometimes find them foraging in trees, they prefer to be on the ground.

Rock hyraxes primarily feed on plants, some of which are very tough to digest. To assist the digestion process they have a three chambered stomach filled with symbiotic bacteria which breaks down even the toughest of plants. As hyraxes are not born with the bacteria in their stomach, they eat the faeces of adults to get it.

Living in large groups of up to 50, these furry creatures are actually quite lazy. They cannot regulate their body temperatures very well so you will often find them sunbathing, an activity which they absolutely adore! They are usually active in the mornings and evenings but it is believed that rock hyraxes are inactive for 95% of the time. 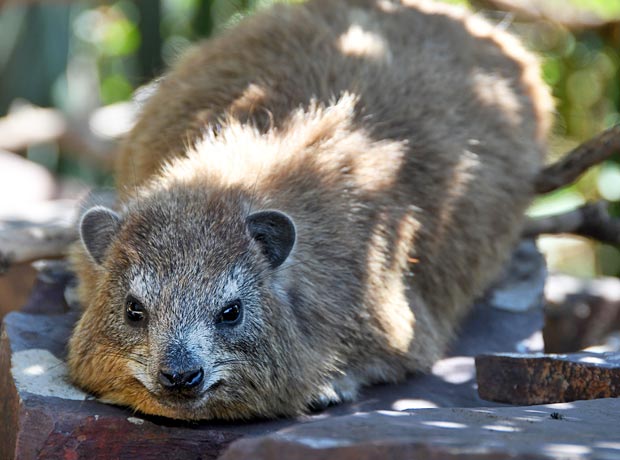 One dominant male usually has around 10 females and he guards his territory very carefully. The gestation period of the rock hyrax is around 6 to 7 months which is fairly long for their size. The female gives birth to a litter of up to 4 pups that have their eyes wide open at birth. After around 2 weeks the young pups are able to eat solids and they are weaned after about 16 weeks. The male pups are usually chased away from the group by the dominant male.

Rock hyraxes can make more than 20 different sounds that are used for communicating and alerting one another to potential danger.

So next time you are out in the Serengeti, be sure to go to the visitor centre in Seronera where these funny creatures can easily be seen.