The Selous- A Parade of Giraffes and a Lake

The Selous Game Reserve in the southern part of Tanzania, has a special place in my heart. The reserve is home to large herds of herbivores, stealthy predators and an avian beauty that ornithologists dream of and the landscape is characterised by grasslands, miombo woodlands, lakes and majestic rivers.

Although only a small part of the reserve is designated for photographic safaris and the rest for hunting, it still feels like of one of the wildest places in the country.
I have heard on occasions that visitors complain that the animals are too shy, that all they do is run away as soon as you approach them. This behaviour is probably due to the fact that the Selous has been the hunting grounds for centuries and the wildlife has evolved to fear man. That said, I find it a true depiction of how wild animals behave. 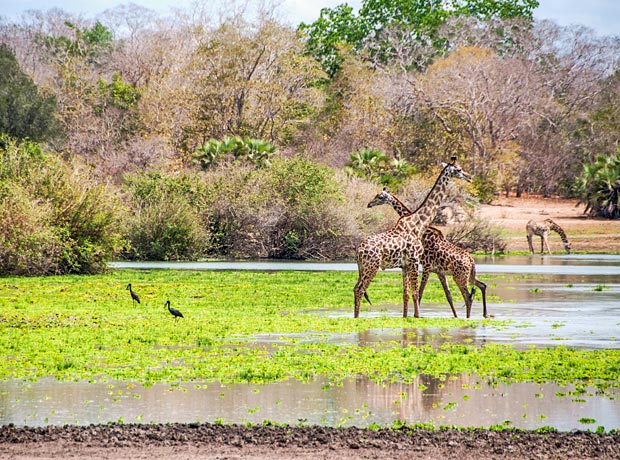 We had a lovely encounter at a small lake south of Lake Mzizima in the Selous in October (2015). As our safari vehicle approached the watering hole, we could see that there were two giraffes making their way into the water to drink. The lake’s edge was quite bushy and we could not really see all of it, so at this point we did not realise what was in store for us.
The two giraffes continued slowly to get into a drinking position, but now and then they stopped to watch what we were doing. After some time the giraffes moved out of our view. We could, however, hear that there was a lot of movement going on in the water so we drove to the other side. Once we had circled around we were greeted with an amazing view about 70m from our vehicle. A herd of some 10 giraffes were practically standing in the middle of the lake enjoying the freshness of the water on their hooves. 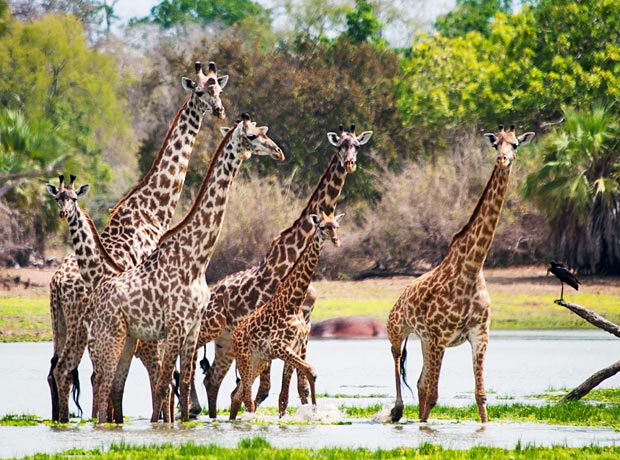 We watched as these elegant creatures paraded from the middle of the lake to the other side. During the whole encounter, not once did the giraffes decided to run off. They accepted our presence and gave us a show I will never forget.