Home//Animals & Plants, Stories//Giraffes – elegant giants in the savannah
Previous Next

Giraffes – elegant giants in the savannah

Giraffes are very fascinating animals – graceful and mostly gentle. Whilst on safari in Tanzania you are likely to come across these giants. There are nine subspecies of giraffes and only one of them, the Maasai Giraffe, occurs in Tanzania. The different species distinguish themselves by their coats.

The giraffe got its name from the Arabic name “Zirapha” meaning the “fast walker”. In the 1600’s it became giraffe in English, derived from the French word girafe.

Giraffes are the tallest terrestrial animals in the world and males can reach a towering height of nearly 6 meters! They can weigh well over a ton, whereas females are just under. In the wild, giraffes can live up to 25 years. Their preferred habitat is savannah, grassland and open woodland and they are found in sub-Saharan Africa stretching all the way from Chad to South Africa.

Their main source of food is acacia leaves and their height gives them the opportunity of the first pick of lush and juicy acacia leaves that other ungulates can only dream about. The tongue of a giraffe is purplish-black in colour and can be as long as 45 cm! Their tongue is prehensile and allows it to grasp the leaves easily. The inside of the mouth is covered in papillae which protects it from thorns.

Even though the neck is so long, the giraffe much like a human, only has seven cervical vertebrae. Another interesting fact about giraffes is their heart which has to be big and strong for it to pump the blood all the way to the brain. And big it is – with a length of approximately 60 cm and weighing in in at over 11 kg.

Bulls use their long necks to establish dominance by using them as a weapon. This behaviour is known as necking and it’s when two bulls stand side by side, swinging their necks in the hopes of landing hard blows to the opponent. These fights can last up to 30 minutes and some bulls end up with broken bones or other severe injuries that later result in death! The winner of such a battle gets the privilege to mate. 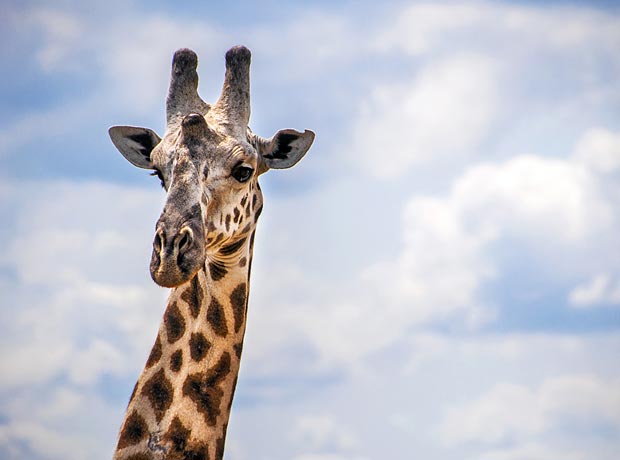 Both males and females have horns known as ossicones. An easy way to tell the gender of a giraffe is by looking at its horns. While the male’s horns are more robust and bold at the top, the female’s horns are much thinner and with a tuft of hair.

The gestation period for giraffes can last up to 450 days after which a single calf is born. The birth is quite peculiar; females give birth standing which means the calf is brought into the world by falling almost 2 meters! But there is a good reason for this as the long drop helps to sever the umbilical cord and furthermore push-starts the breathing system of the newborn. At birth, calves can already stand at a height of 2 meters.

Females along with their calves join nursery herds with other mothers and calves. It is common to see females leave their young in such “kindergarten” groups and go off to forage by themselves. During the mother’s absence, the other females keep an eye on all calves. 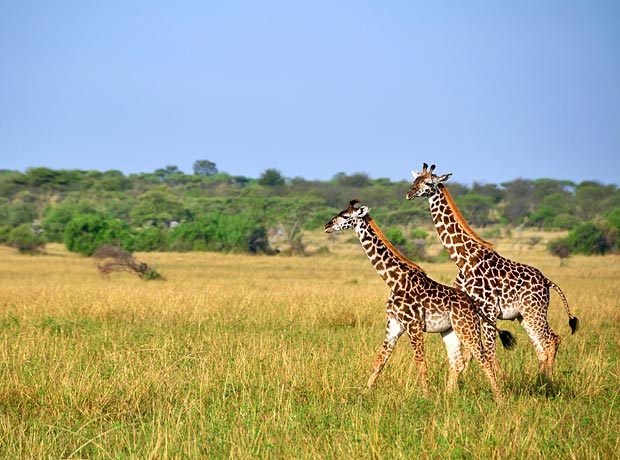 Giraffes are preyed on by lions but an adult giraffe can be extremely dangerous to lions as well. Young giraffes can even be taken down by leopards, hyenas and wild dogs. Crocodiles have also been known to kill giraffes when they are drinking. It is during this time that giraffes are most vulnerable as they have to spread their front legs in an awkward position to be able to drink. Being in this position is a hindrance for them as they are unable to flee in a hurry.

Next time you are out on safari and see a giraffe, take a closer look at how it walks. They walk by moving the legs on one side of the body at the same time, then doing the same on the other side. It’s truly funny to watch and I am always amazed that they don’t fall over. Giraffes are also quite fast and when galloping they can reach speeds of more than 60 km/h and they can sustain a speed of 50km/h for several kilometres.

Arusha National Park is a great place to see these majestic creatures in their natural habitats, so be sure to stop by!