Everyone knows hyenas as they are often depicted in movies and cartoons as clumsy and greedy animals. This is unfortunate because these predators are actually very clever. The spotted hyena (Crocuta crocuta) is a common predator occurring in most habitats of Africa and it is the largest of its family of three species. The other two hyena species are the brown and striped hyena.
In terms of size, the spotted hyena grows up to 90cm (at the shoulder) and the body length can be between 95 to 165cm. Interestingly enough, the females are actually larger than the males. One of the reasons is that females have to protect the cubs if the males would threaten to kill the young ones.
In the wild hyenas live in dens, which were previously dug by aardvarks or warthogs. Females will mate with several different males and the gestation periods lasts for 110 days after which on average two cubs are born. At first, the cubs are kept separated from the clan and only after a few weeks the mothers introduces the cubs to the clan when the cubs will share the dens with other members. The female cubs tend to stay with their birth clans but males are chased away as soon as they reach maturity. On average a wild spotted hyena can live up to 20 years.
The fur of the spotted hyenas can vary widely between animals as it depends on age and climate. Usually the colour ranges from yellow to grey with spots. The fur is short and coarse and a short mane grows along the back of the head down to the back. 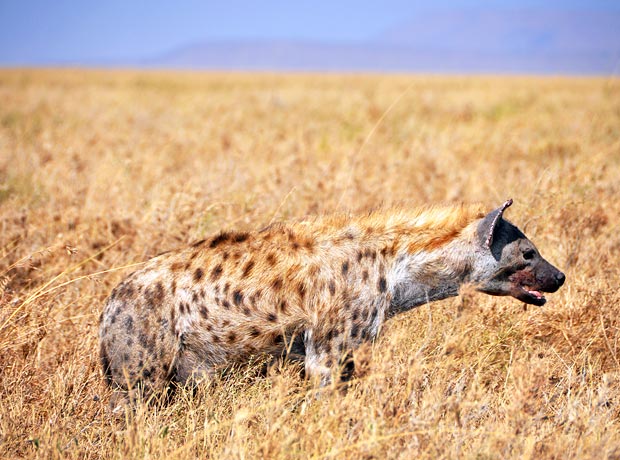 The shape of the spotted hyenas is also quite unique; they have large heads with round ears and the front legs are longer than the hind legs. This gives them a slanted posture a little similar to that of a wildebeest.
Most people think that hyenas are scavengers only that do not hunt. This is incorrect. Actually, hyenas are very good hunters and would eat pretty much anything. In general, they play a vital role in the ecosystem because they keep it clean.
Hyenas are mostly nocturnal. They have excellent night vision and hearing making it easier for them to hunt or scavenge. Hyenas usually hunt in packs but can sometimes hunt alone. They usually pick out the weak or young from a group and chase it until it is totally exhausted. Hunts are slow as hyenas have great stamina being able to trot up to 10km without tiring. Some researchers say that hyenas can catch a wildebeest after only 5km! Once caught, the prey is eaten quickly. It is said that a single adult hyena can eat up to 14kg of meat in one sitting
Hyenas have one of the strongest jaws in the animal kingdom and can bite right through most of the bones that they have hunted. They are not fussy eaters – apart from hair and horns they are able to digest every piece of a carcass. The extremely potent stomach acids can digest even the toughest delicacy.

Groups of hyenas are called clans and consist of up to a 100 individuals. Their social structure is complex. Clans are led by females with each individual having its own rank in the clan. This is respected at all times, to the point that the youngest cubs of the lowest ranking female have a higher position in the clan than the highest ranking male. Competition is fierce and it starts soon after birth – cubs might kill weaker siblings when fighting for a better chance to eat first. 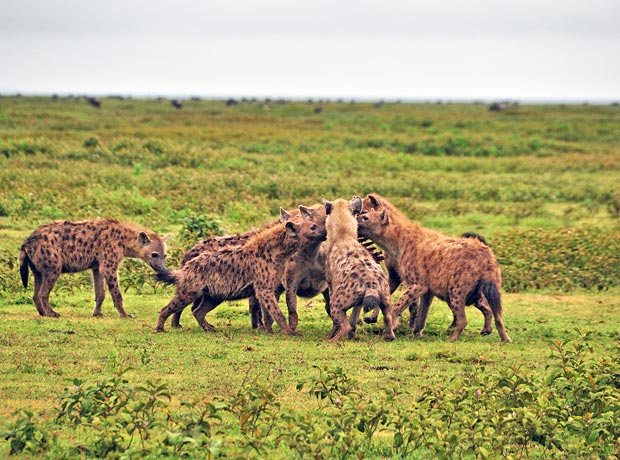 These predators are also very vocal and researchers have recorded 11 different sounds. The classic ‘laughing’ is usually used in times of nervous excitement or to show submission to a more dominant hyena. Apart from the laughing at night, the ‘whoop’ sound is common and can be heard kilometres away.

I could write pages about these interesting animals, but I hope this will give you an idea of just how intriguing these wild creatures are. They can be seen in almost all of the national parks in Tanzania, but one of the best places has to be the Ngorongoro Crater.