While on safari in the Ngorongoro Crater recently we had many memorable sightings, but there was one that stood out amongst them all; an elegant male serval cat in broad day light!

For any one seeing it for the first time, a serval could easily be mistaken for a cheetah or a young leopard. Yet if you look closely you realise it is a different cat – quite slender with relatively long legs and a small head. Its coat is spotted and in certain places, like on the insides of the legs, the coat is striped. 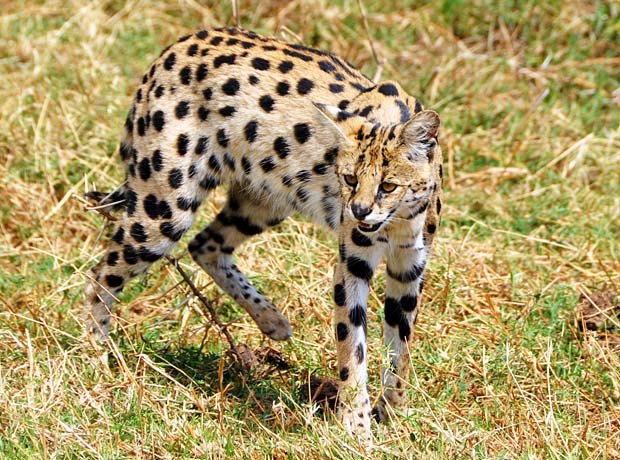 Servals are nocturnal animals and their large ears help them locate prey at night. They are also considered to be the highest of the wild cats and can reach up to 90 cm from head to tail and stand at 50 – 60 cm to the shoulder. Native to Africa these stealthy cats can adapt to almost any habitat, but is most at home in the savannah.

These cats are by far more efficient at hunting then for example lions or leopards. Up to 50 % of hunts are successful and they implement different tactics when it comes to looking for dinner. A serval’s diet consists mainly of rodents but will also prey on hares, birds, lizards, hyraxes and reptiles. They are agile jumpers; some individuals can easily jump up to 2-3 m in the air, sometimes even catching birds in flight.

Servals tend to live a solitary life and both males and females have their own home range which tend to overlap. Gestation can take up to 75 days after which usually two kittens are born. They stay with the mother for about a year before starting their own lives. A serval can live up to 10 years in the wild and sometimes fall prey to leopards for example. 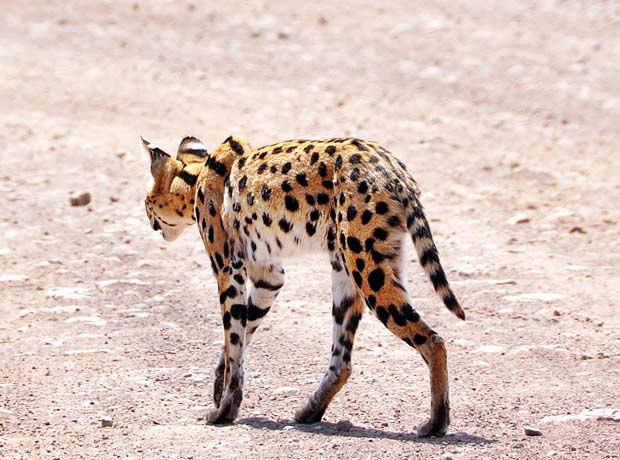 We were lucky to spot this fine specimen crossing the road right in front of us. It was clear from his behaviour that he was out looking for lunch and even though we watched him for while, we did not see him catch anything. Nevertheless it was still a rewarding sighting and a highlight for many in the group.

By Taher Nassrulla|29th April 2015|Animals & Plants, Stories, Tanzania through the eyes of our guides|0 Comments