A cat in a tree, you’ve seen it before and if it wasn’t your house cat – let’s face it, how many city cats go on adventures these days – it’s still a common sight in children’s books. And even your house cat’s wild relatives in Africa climb up the scratchy bark without problems. Leopards that is! Tree climbing lions on the other hand have long been considered very rare.

Could this have changed and will tree climbing lions be a common sight on your next safari?

For many years, only two prides were seen climbing trees as part of their daily routine: one pride in Uganda’s Ishasha district, an area of the world-known Queen Elizabeth National Park, and another pride in Tanzania’s Lake Manyara National Park. 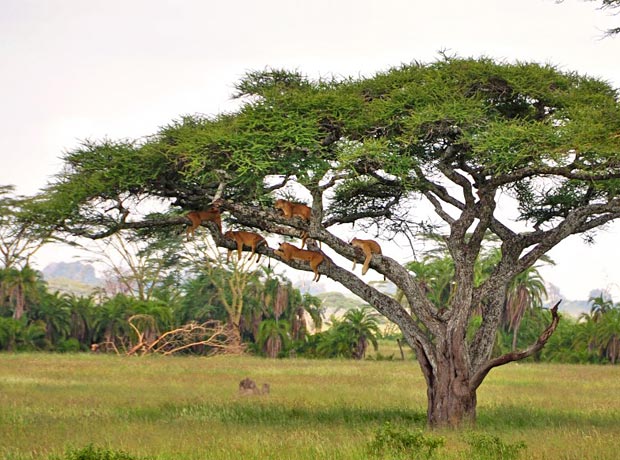 However, today you can spot the majestic cats climb acacia and sausage trees in Tanzania’s Serengeti and Tarangire National Parks as well. Even in South Africa’s Kruger National Park, lions were spotted climbing up trees. Research done in Uganda suggests that a decline in prey in their particular habitat brings the lions to increase their home range, covering larger territories. Hence, they can be spotted in more regions than their home grounds.

As with many mammals, lion cubs learn how to navigate through life from their parents. This includes hunting, social skills and in the case of the tree climbing lions – climbing up trees. After all, they are the kings of the animal kingdom and may well do whatever they like. 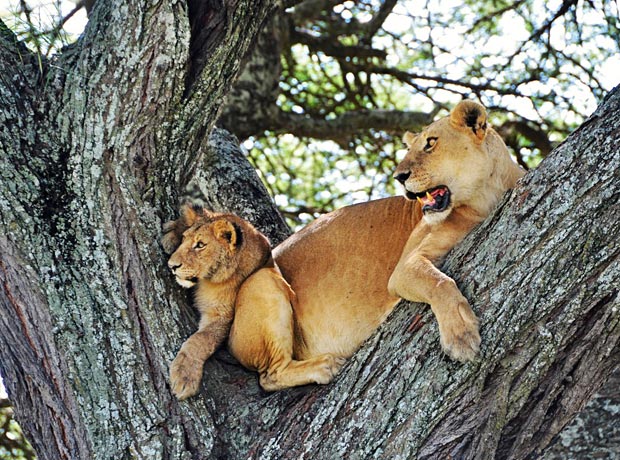 Why do big cats climb on trees?

In the case of the tree climbing lions, researchers argue they use the elevated spot to enjoy a cooler breeze, escape tsetse flies and other bugging bugs on the ground and get a better overview of their surroundings. However, lions will not eat in trees, they will always come to feast on the ground. 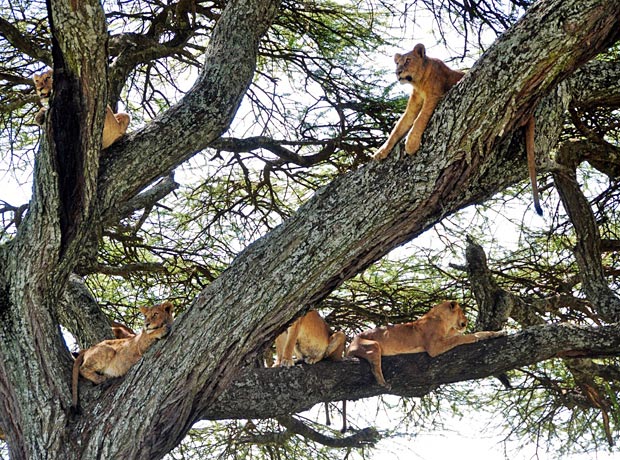 Leopards on the other hand climb trees to hide their prey from thieving hyenas and lions. The sturdy cats manage to hoist a kill several times their own body weight onto a forked branch, where they can take several days devouring their feast and taking naps.

Cheetahs on the other hand are regularly spotted jumping on safari vehicles, much to the astonishment of travellers on the other side of the window pane. They always look for the highest elevation and if it happens to be a car, they won’t be picky. From the top of the bonnet, or even the roof of the safari vehicle, they will let their gaze wander across the open plains, looking for their next prey. Don’t fret, cheetahs have not been known to attempt entering the vehicles through the open pop-up roofs. They would only hunt what’s moving away from them and moving fast. They chase their prey out in the open.

While we know of more tree climbing lions today than we did several years ago, it is still a special and memorable sight. If you want to see them for yourself, join us on one of our safaris and together we scout for the deviant kings of the animal kingdom!