Home//Animals & Plants//What are the most common trees in the Serengeti: 6 Serengeti trees you can’t miss on your safari
Previous Next

What are the most common trees in the Serengeti: 6 Serengeti trees you can’t miss on your safari

The Serengeti National Park is the „benchmark“ of all things in the wildlife landscape of Tanzania. It is a premier safari destination for travellers from all over the world. Beyond the vast grassy areas, it is above all a variety of trees that give the scenery a typically African flair. What are the most common trees in the Serengeti? Today’s blog presents 6 of them. 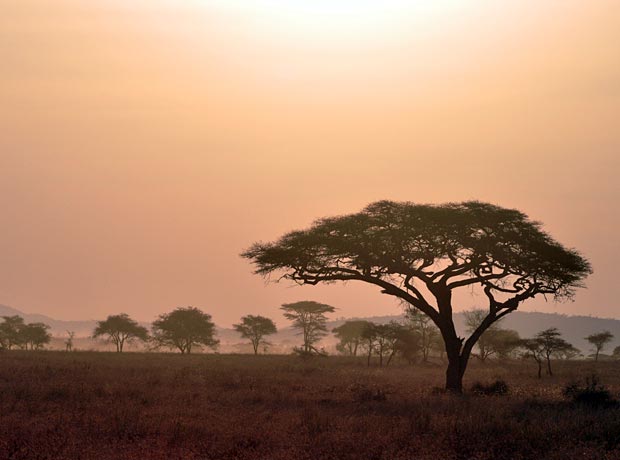 The endless plains of the Serengeti form the backdrop to the world’s largest unaffected migration of animals. Every year, more than a million wildebeest and hundreds of thousands of other ungulates embark on an approximately 1,000 km long circular route that stretches across the two neighbouring countries of Kenya and Tanzania. But even apart from the great migration, the animal population of vegetarian four-legged friends and carnivorous predators is immense. Much to the delight of tourists on one of the coveted safari tours.

Looking at the Serengeti, however, the trees often also stand out. On the one hand because lions, leopards and some fascinating birds of prey sit in these trees. On the other hand, because they are the epitome of an “African landscape” for travelers. I would like to introduce you today to 6 of the typical trees you can find in the Serengeti.

Do you want to learn more about traveling to Tanzania? We are happy to advise.
Get in touch with us!

The umbrella acacia is the tree that represents Africa like no other. Like mighty parasols they stand in the savannah offering shade. Imagine a lion having its siesta underneath or a giraffe looking over the top chewing acacia leaves and the picture would fit perfectly with all clichés of Africa.

Of the various umbrella acacia species, Acacia tortilis (Vachelia tortilis) is the most common in the Serengeti. Like other acacias, they serve as a source of food for numerous animals, without intending to be. To them the giraffes are particularly annoying, and they defend themselves by producing tannins. They spoil the meal of the disrespectful browsers by “poisoning” their leaves. This does not lead to death but causes problems for the stomach. And because the acacias have learned that sticking together increases the chances of survival in the Serengeti, they send out messenger substances (ethene) to warn their fellow species in the vicinity. This way, they can already prepare the tannin overdose before anyone even pounces on their leaves.

Have you ever seen giraffes smile during their feeding tour? They probably do it to poke fun at the acacia’s fussy behaviour. Instead of heading for their favourite food downwind with the messenger substances, they move against the wind when searching for food. 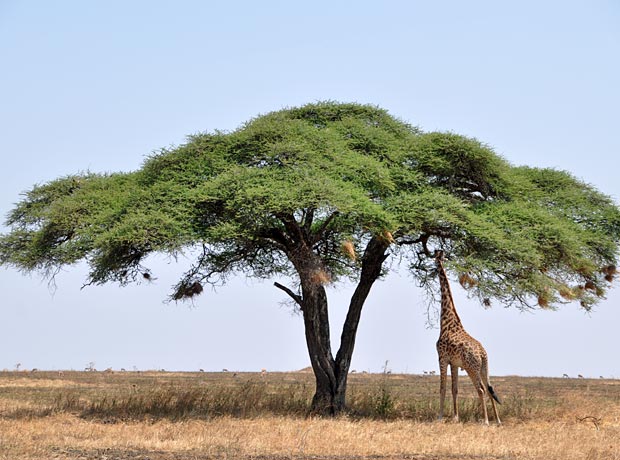 Should a giraffe actually eat too many tannin-overdosed acacia leaves and have stomach problems, then Commiphora africana would be the antidote. The bark, roots and berries are used in traditional medicine for a variety of treatments, including indeed stomach ailments. But it can also be used to combat colic in children, liver problems and skin rashes.

The Commiphora africana is the most common of the different Commiphora species in the Serengeti, especially in the eastern part of the park. You can easily distinguish them from the umbrella acacias not only because of their shape. But also by its striking peeling, papery blue-yellow bark. 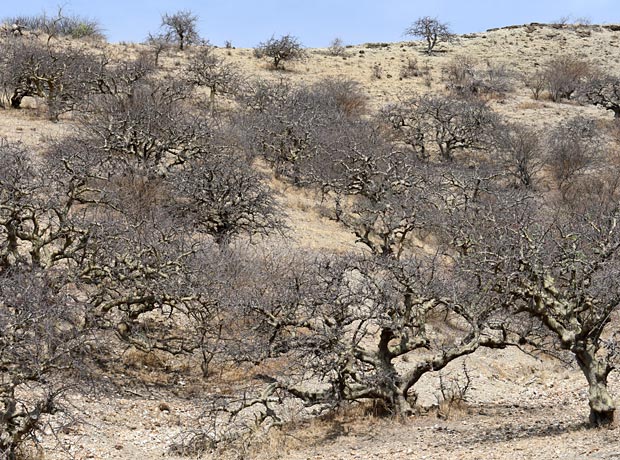 This tree also has to do with diseases. But in a different way than it appears at first glance. First of all, the “xanthophloea” part of the tree’s scientific name comes from Greek, meaning “yellow bark”, which is very distinctive on the tree. In this respect, the translation doesn’t refer to the illness yellow fever, but a fever tree that is yellow.

The colloquial name fever tree comes from the combination of two things: Firstly, from its tendency to grow in swampy areas, floodplain forests, on lake shores or high groundwater areas. In the Serengeti, these are mainly wet areas with black cotton soil, such as along rivers. On the other hand, European settlers in the region noticed that these yellow trees were more common in areas with malaria fever. So they concluded that the “fever trees” are the cause of malaria. Today we know better: malarial fever is spread by mosquitoes that live in swampy areas where this species of tree thrives. 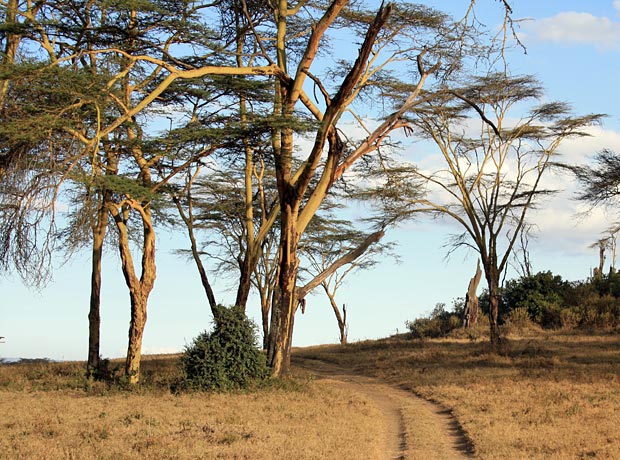 Admittedly, you won’t find this big tree in the Serengeti easily. It’s all the more impressive when you see it. The German name reveals a lot. There they call it “liver sausage tree”. It actually looks like oversized liver sausages that are growing on this tree hanging from long stalks. These fruits can easily grow to 60 cm and larger. But beware: they are poisonous. At least for humans.

The fruits are preferred food sources for large mammals such as elephants, but baboons can also open the hard “berries”. Eventually the ripe fruit will fall from the tree and rot there if not eaten first. In both cases, however, they release seeds – either directly or after a long, exciting journey through the digestive tract.

Any guide in the Serengeti will tell you that the worst place to camp is under a sausage tree: “If the 5-10 kg fruit doesn’t crush you, then the elephants will when they come to collect the fruit.”

Incidentally, a common belief among local people is that if you hang the fruit of the sausage tree in your hut, you can ward off storms. 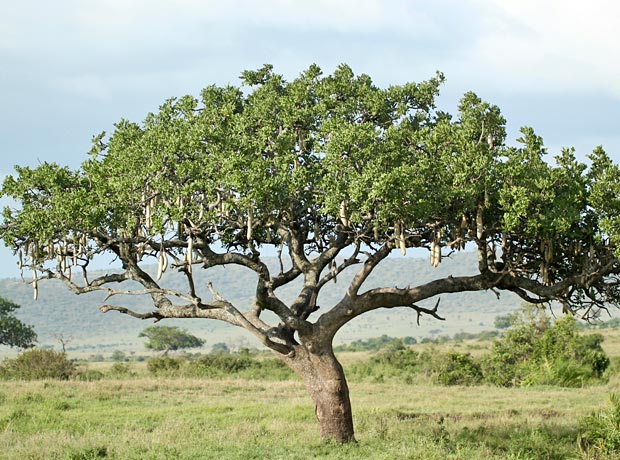 Even the name sounds like a threat: the strangler fig. It sounds like you shouldn’t get too close to it. Imagine you are standing somewhere nice in the sun and suddenly a small plant begins to climb up on you. You have no chance of escaping. And as this parasite uses your body to climb closer to the sun, it branches and thickens relentlessly. Slowly but surely, you will be strangled and at the same time disappear into the ever-tightening web of the plant. While you are now barely visible from the outside, the rotting process is already beginning inside. What remains is the shell of a plant that no longer needs you to survive.

Yes, nature can be brutal. Although this attack of the strangler fig is not on people but on trees, the result is the same. But the tree produces highly nutritious leaves, twigs, and bark in large quantities year-round that make life easier for wildlife.

The strangler fig is considered a sacred tree in the region. Among the Agikuyu and Mount Kenya tribes, for example, it can bring rain when an elderly makes an offering to their god Ngai by fanning the smoke of a roasted, fattened lamb up the tree. 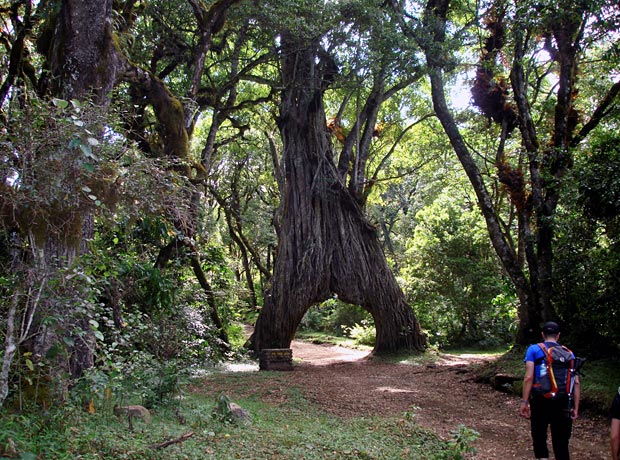 This Strangler Fig grows in Arusha National Park, not in the Serengeti

Translated, it means candelabra tree and at first glance it actually looks like a huge candelabrum with countless candlesticks. Nothing you want to put on the table at a romantic dinner. But maybe the setting of a Bush dinner?

However, I don’t recommend burning down the candelabra tree. It is a spurge plant. The white latex sap of the plant is poisonous. You shouldn’t inhale smoke anyway. But especially not together with the spurge substances in the smoke. Just touching the thick milky broth can cause skin irritation and if it comes into contact with the eyes, it can cause blindness.

The tree, which is widespread in the Serengeti, especially in the western and northern parts, has another special feature: It looks like a plant hybrid: it looks like a cactus at the top and like a regular tree at the bottom of the trunk. 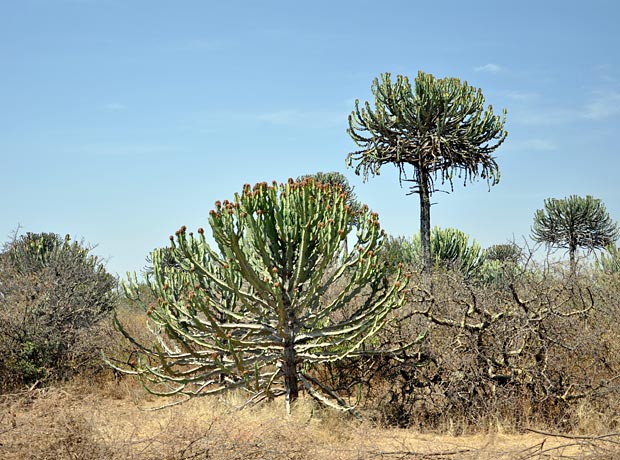 Tanzania is full of highlights. The Serengeti is one of the most popular safari destinations. We are happy to answer any questions and help you plan your trip to Tanzania, whether on a group tour or private safari. Here on site we are always well informed about the current situation. So get in touch with us!