Home//Background Info, People & Culture//What is the culture of the Maasai known for: 10 interesting facts about the Maasai
Previous Next

What is the culture of the Maasai known for: 10 interesting facts about the Maasai

The Maasai live in Tanzania and Kenya. In Tanzania, they make up only a small part of the population. For many travelers, however, they are the most well-known ethnic group in this multi-ethnic nation. So who are they? What makes them so interesting and well-known? 10 facts worth knowing about the Maasai should make you more familiar with them. 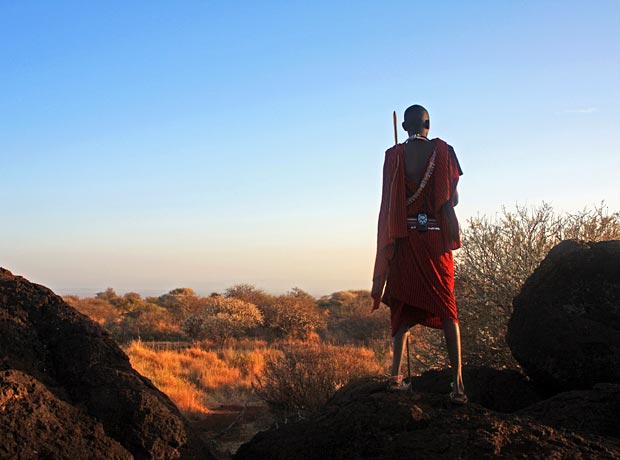 Since the census in Tanzania does not take ethnic origin into account, the exact number of Maasai people is unknown. In Tanzania, they mainly live in the north around the Serengeti National Park and the Ngorongoro Conservation Area. As a result, they are very present in the perception of tourists. But the Maasai are a mystery to many travellers. They appear exotic and mysterious. Therefore, the small selection of the following facts worth knowing about the Maasai should bring some light into the darkness:

1. Masai or Maasai – the right spelling

The language of the Maasai is “Maa”. It is a Nile language from the area around the Nile valley. Derived from the Maa, the Maa-sai are the Maa-speaking people. Maasai organisations, such as the Maasai Association, therefore prefer the term “Maasai” instead of Masai or Massai.

Like so many other nomadic groups in Africa, the Maasai were wandering around. The first herding families of the various Maasai groups probably migrated from Sudan to Tanzania around the 15th century. With their cattle they looked for fertile meadows. The first notable settlements as far as central Tanzania took place between the 17th and 18th centuries. There is evidence that the Maasai displaced other local ethnic groups or mixed with them.

Although today many Maasai follow Christianity or Islam, they once saw only Engai or Enkai as their creator god. But he does not live in the sky and instead enthrones on the top of the volcano Ol Doinyo Lengai. When the mountain smokes and spews lava, it is because Engai is angry. According to lore, Enkai gave the Maasai ancestor couple 100 cows & cattle, goats, and sheep. For the Maasai, livestock is both a purpose in life and an income. Cattle in particular is their currency.

You want to learn more about traveling to Tanzania? We are happy to help you plan your trip.
Get in contact with us!

In addition to the semi-nomadic livestock farming, the Maasai are best known as warriors (Moran). Their traditional weapons are the sword (Ol Alem) and the spear. During their expansions in the past, they were often superior to the other ethnic groups they encountered. Today they are mainly herders. But just like in the past, they still have to protect their livestock and families from predators, especially lions.

As part of their culture young men used to hunt lions when coming of age, alone or in a group. It demonstrated courage and strength. Even if this custom can still be found occasionally today, it is officially outlawed. The lions enjoy species protection and are above all a tourist attraction that secures an income for the country and its people.

But since the Maasai live mainly off their livestock (milk, meat, warm furs, etc.), losses from lion attacks quickly become a family tragedy. In order to prevent “vigilantism”, the government pays compensation for the affected families. Unfortunately, this doesn’t always work smoothly.

As a semi-nomadic people, the Maasai traditionally move according to seasonal conditions for feeding their livestock. The rain is followed by fresh grass. Just a little later, only grazed pastures remain and are left untouched until the next rains come. A sustainable form of livestock farming that occurs naturally. But nomadic life is difficult in modern times. Space for movement is becoming more and more limited.

And yet: if there is a prolonged period of drought, any existing borders to the neighbourhood or to protected areas are ignored. The well-being of the animals comes first, and unused pastures have to be used for survival until the rainy season arrives. In Maasai philosophy, no one should be denied access to natural resources such as water and land anyway.

Their cattle, goats and sheep are the Maasai’s main source of income and means of payment. It is exchanged for other livestock, livestock products, or money. Within Maasai communities, individuals, families, and clans form close bonds through the gifting or trading of livestock.

Maasai women and girls are responsible for providing water, collecting firewood, milking the cows, and cooking for the family, as well as building the houses. The houses (Inkajijik) resemble the shape of a loaf of bread. Only the main ingredient here is not wheat, but tree branches, grass, mud, cow dung and cow urine.

The family huts are usually built around a large central square. In the centre, there is a corral where livestock are protected from predators at night. This family kraal is called a boma and is usually an area surrounded by thorn bushes.

The men who have matured into warriors are responsible for security. The boys have to look after the cattle. In times of extreme drought, they are supported by the “warriors”.

The elders of the group watch over it all. As the head, they announce the schedule for everyone before the start of daily activities. Status, tasks, and social life depend on the Maasai’s age. 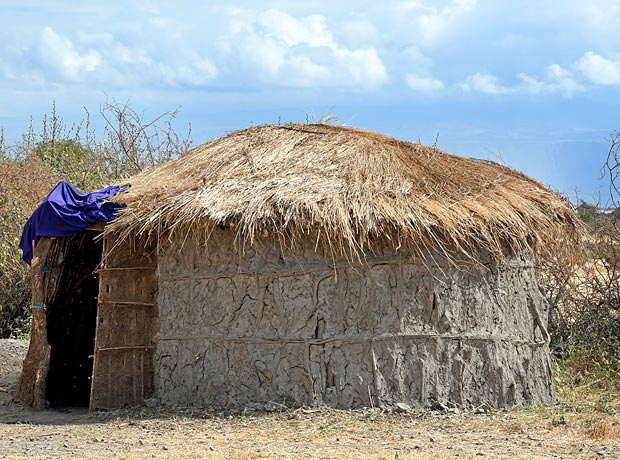 Maasais do not only stand out because they are very tall on average. Their brightly coloured clothing in particular catches the eye. In our Western society, clothing by gender, age and region may become increasingly blurred. Not so with the Maasais. Red, black, and blue are very popular colours among the Maasai. The cloth, or shuka, they wrap around the body is often checked and striped in these colours. For example, young Maasai wear black for several months after their circumcision ceremony. Both men and women proudly wear their colourful pearl jewellery. However, the woven fabrics have only been accessible to the Maasai since the 1960s. Before that, they mainly wore clothes made of sheepskin and calfskin.

As if their colourful clothes weren’t striking enough, they also impress with their elongated ears. This is not a reminder of cheeky childhood days, but also an expression of their culture. Both men and women use thorns to pierce earlobes. Twigs, bundles of twigs, stones, the cross-section of elephant tusks, and empty film canisters follow to stretch the holes. They wear metal hoops on their prepared ears and women wear additional jewellery and small piercings at the top of the ear.

The Maasai maintain a number of ceremonies. But the circumcision ceremony (emuratta) is the most important of all rites of passages from youth to adulthood. It is accomplished during puberty.

The boys’ foreskins are removed without anaesthetic. Showing pain is considered weakness and is suppressed. The wound is disinfected with ash. A healing process follows and takes about 3-4 months. However, they must wear their black ceremonial dress and white paint for a period of 4-8 months. During this time, they mature into men and finally receive the status of a warrior (moran).

Traditionally, Maasai girls are also circumcised and undergo the transformation into women during the healing process. After the ceremony, they are marriageable. The family often prefers an older man, since the young warriors often cannot pay the required “bride price” of 25 or more cattle. More and more women are becoming women without circumcision. The international ban on genital mutilation and the massive educational campaigns about health, physical and psychological damage are cause for the families to rethink.

In Maasai culture, drinking raw cattle blood is an honourable tradition and usually reserved for special occasions. For example, after circumcision, in a ritualized form, blood is drawn from the neck of a young bull, mixed with milk, and given to the circumcised boys to drink. Also, when a woman gives birth to a child, a glass of blood is given to celebrate the day. Blood is rich in protein and according to them strengthens the immune system. Elders, on the other hand, also drink blood to ward off or at least soothe a hangover after a drinking session.

Like many other traditionally thinking and living ethnic groups, the Maasai are subject to the challenges of social and climatic change:

In Tanzania, important protected areas such as Tarangire, the Serengeti and the Ngorongoro Conservation Area are located on Maasai ancestral land. These areas serve to protect nature and animals. They are also intended for wildlife viewing and tourism. In the national parks, therefore, the Maasai are forbidden access to water sources and pastureland. The “Conservation Area” status alone gives them more freedom.

In Tanzania, the human population as well as the number of grazing livestock and use of land as pasture are increasing. This has led to conflicts of interest between the government and the Maasai.

Developments in society as a whole are also changing Maasai life. For example, the introduction of formal schooling leads to role changes in Maasai families. Compulsory schooling puts the responsibility for tending livestock in the hands of the parents. At least during the week, because on the weekends when there is no school, the boys can resume their traditional responsibility for raising livestock.

The result of these developments is the increasing dependence of the Maasai economy on the market economy. Livestock and livestock products are more and more being used to buy jewellery, clothing, and grain. The Maasai also use it to pay for school uniforms and school fees for their children.

At the same time, in some regions it is becoming more normal to see young Maasai men and women selling grain, charcoal, mobile phones, accessories and other items in addition to their goats and cows. The men work as night watchmen and bouncers and increasingly also as guides, waiters, or managers in the safari areas.

Attempts by the government to develop agriculture in the country are depriving the Maasai of important rangeland. At the same time, global climate change appears to be increasing droughts in East Africa. The cattle herds are shrinking, and more and more people are dependent on auxiliary food. These conditions are forcing the Maasai to abandon traditional ways of life, to develop an entrepreneurial spirit and to open up to alternative ways of life. 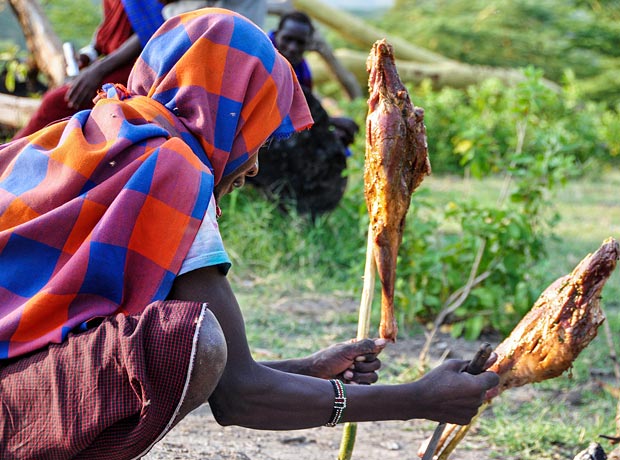 The consequences of the global tendencies to open up in all areas of political, economic and social life are disintegrating the traditional structure on all levels. The Maasai’s tribal leadership, the Council of Elders, is also losing more and more power. This generates disorientation, loss of security and the increased erosion of traditional values ​​at a rate that leaves little time for healthy adjustments to new ways of life.

Nevertheless, and precisely because of this, many Maasai families are very open to tourists’ interest in their traditional way of life. As paradoxical as it sounds, the opening of their village gates is on the one hand an invitation to “voyeurism”. On the other hand, however, it is a legitimacy to preserve their traditional way of life. Here it even becomes a solution to the problem because it generates income.

Tanzania is full of highlights. The Maasai people are something special for friends of encounters with foreign cultures. We are happy to answer any questions and help you plan your trip to Tanzania, whether on a group tour or private safari. Here on site, we are always well informed about the current situation. Get in touch with us!