White storks are large birds belonging to the stork family. Adults can grow to be a 110cm in height with a wingspan of 150 to 200cm. Most of their plumage is white and their wings black, the feet and the beak are both red in colour. 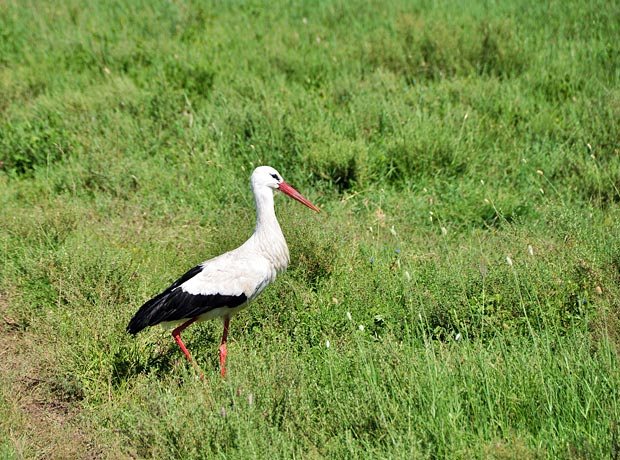 These birds are strictly migratory, travelling long distances from Europe all the way down to East Africa and even South Africa every year. Migration usually occurs during the winter times in Europe. In Tanzania we usually start seeing white storks around the end of January and the usually stay until March. I guess this time in particular is good for the storks because most of the farmers start to prepare their farmland.

Storks rely heavily on pockets of hot air (thermals) to help them soar and go long distances without having to constantly flap their wings. 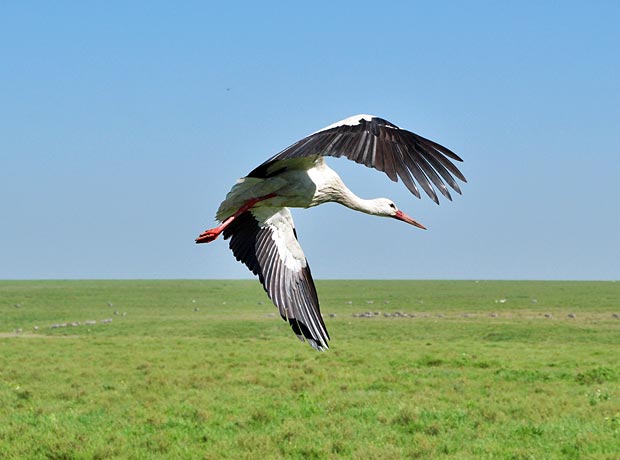 Thermals do not form over water and is the reason why storks tend not to cross directly over the Mediterranean Sea from Europe to Africa.
These storks use two routes to get to Africa – the western and eastern route. The eastern route takes advantage of the landmasses by crossing the Bosporus in Turkey and circling around the Mediterranean via the Middle East, after which they follow the Nile River southwards. The western route takes the birds across the Mediterranean over the Strait of Gibraltar. The journey from Europe to Africa and back can be as much as 20 000km for some birds!

In Europe, white storks – both male and female birds – construct large nests of sticks which are built on manmade structures like churches, rooftops, chimneys, telephone poles, walls and towers. Some home owners even help the nest building by adding platforms on structures to help support the huge nests. Many cultures believe that the storks are the bearers of good luck and that is why even in busy cities today one can still find stork nests. Some nests are known to have been used for almost a hundred years and every year before breeding season old nests are refurbished. That is why some nests have a diameter of 2-3m.
Pairs of white storks raise a single brood each year, the female normally lays up to four eggs. Incubation begins as soon as the first egg has been laid which results in the brood hatching from 32 to 34 days later.

Diet-wise these birds are very opportunistic eaters. They enjoy anything from insects, frogs and fish to rodents, snakes, lizards and other small mammals, most of which is eaten from the ground. When migrating, these birds congregate in their thousands to feed on the abundant food. After bush fires is a good time to spot the white storks as they tend to eat their fill on freshly ‘grilled’ insects.

If you go on safari between January and February you are bound to see thousands and thousands of white storks everywhere in Tanzania – from the Serengeti, Ngorongoro Crater, Tarangire and Lake Manyara. 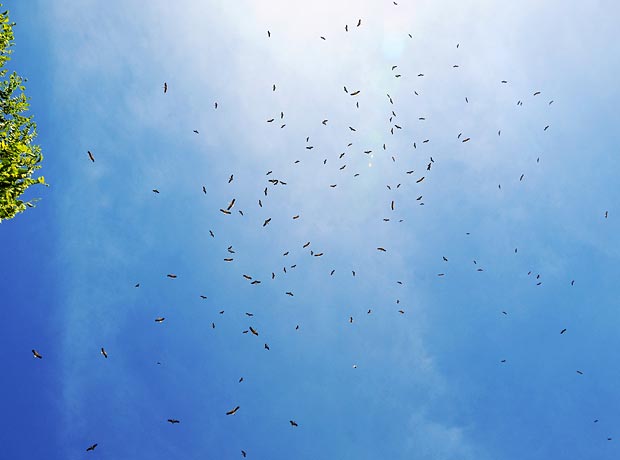 It is also a treat to see how they make use of the thermals, soaring high into the sky in perfect synchronization.