Wildebeest’s in the south of the Serengeti National Park

The Serengeti ecosystem supports to a diverse group of creatures both large and small. Here animals live amongst each other in an almost peaceful way and anyone who gets a chance to witness this wonder is left speechless. 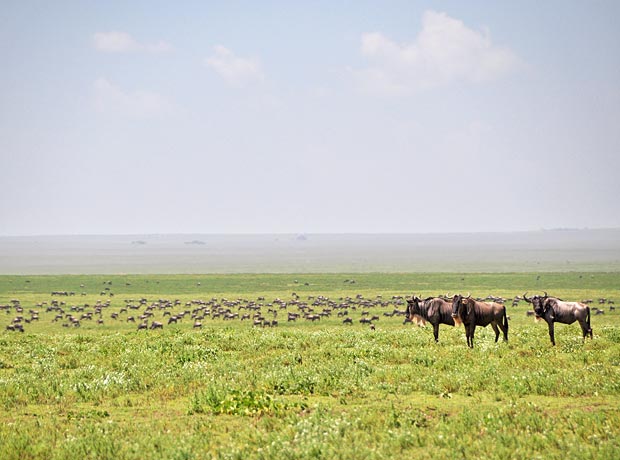 One of the highlights of the park is the annual migration, one of the remaining great movements of large herbivores on earth. Some 1,5 million wildebeest and 500 000 zebras take part in the strenuous thousand kilometres trek every year in search of water and greener pastures.

The migration pattern basically goes as follows: In January to March the animals feed in south Serengeti/Ndutu/Ngorongoro side, then in April to June the move to the western Serengeti.  During July to September they are in the central Serengeti heading slowly north. From September to December they are in north Serengeti, crossing rivers into the Masai Mara. In December and January, they start heading back down to the south of Serengeti. They take pretty much the same route, however, these days the ever-changing weather patterns cause some confusion amongst the large herds. Usually the time around January through to March is an important calving time for the migrating herds.

The wildebeest herds favour the Ndutu area in particular. When I visited in the Ndutu area in February we were lucky to see a few thousand wildebeests feeding on the fresh green grass. It is said that the large herds specifically choose the southern parts of the Serengeti because of highly nutritious grass. This allow the mothers to produce healthy milk for their new-borns. (By the south I mean the areas north of the Ngorongoro Crater, if you head towards the Serengeti.)
Unfortunately, we did not manage to see any calves being born during our time there as we could not reach the area they were in because of the poor weather conditions, but we saw that it was already in full swing. The gestation period of a white-bearded wildebeest is usually about 8 and a half months, after which almost 90% of the calves are born within a time frame of three weeks in February. 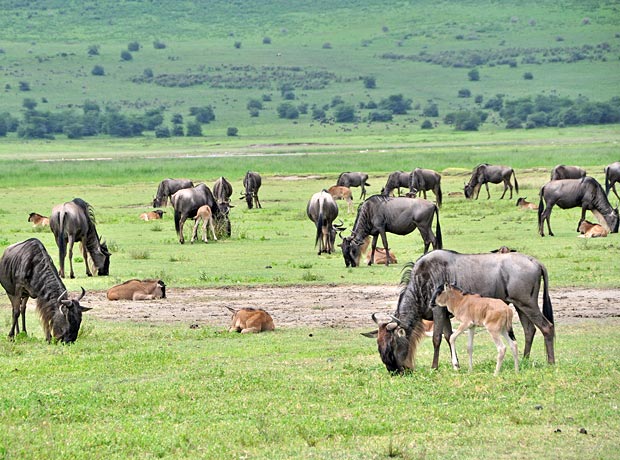 The females do not separate themselves from the herd when they give birth. In fact, they do it in the middle of the herd and usually during the hot midday sun. The reason for this is that predators are often too lazy to hunt during the heat of the day. This gives the calves enough time to get steady on their feet before night arrives. New-born calves can get up to their feet within just a few minutes and are able to keep up with the herd after a few hours. When born, a calf can weigh up to 20kg and can start eating grass after about 10 days but continue to drink their mother’s milk for up to 4 months after birth. Once weaned, the calf stays with its mother until the next calf is born, after which the offspring joins up with other juvenile herds.

Continuing to the Ngorongoro Crater we saw that almost all of the wildebeests had already given birth to this year’s batch of calves. In the crater, most calves are born in the last weeks of January.  They are so funny to watch, totally active, playing, running around – absolutely full of life.