A Cheetah mother and her cub enjoy a hearty breakfast

One of my favourite cats to see in the bush is the cheetah. The best place to see them is probably the Serengeti National Park. Over one thousand cheetahs reside here, if not more.

This being said, it is still not always easy to spot these athletic cats. Competition in the bush is tough and cheetahs try to stay away from potential danger. Which in turn means that they prefer to stay undercover.

Every animal sighting is different, even if it is a sighting of the same species. The animals are always behaving differently, the distance, the vegetation, the light are always different, which for me keeps the whole experience fresh and exciting.

Seeing one cheetah is great, but seeing a mother and her cub is just perfect. A few weeks ago, I was out with a group in the Serengeti where we had a memorable experience.

We spent two nights in the park and on the first day – even though we spent the whole day searching for cheetahs – we unfortunately did not manage to spot a single one. In fact, I overheard on the guide’s radio that many people had not been able to see any cheetahs that day. We were not going to give up just yet and came up with a plan for the next day.

As the sun rose, we enjoyed a hearty breakfast and headed out to explore the wild once again. With eagle eyes, we scouted the grounds. Not even an hour into our game drive one of our guides radioed in some great news: He had spotted a cheetah. We went to check right away.

Upon arriving at the scene, we did not see any sign of the cats. Confused as to where exactly to look, we waited until suddenly some 20 meters away a cheetah’s head appeared and then another one – and so close! 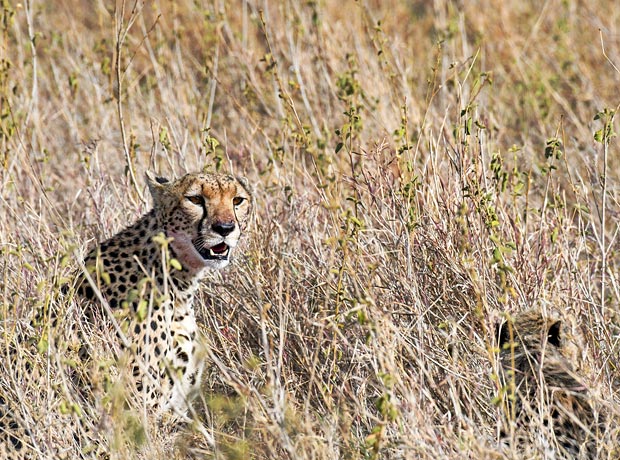 Overjoyed we watched the mother and her cub who now and then would disappear and re-appear from under the grass cover. Taking a closer look, we saw that their faces were covered in blood. Just like us, they too were having a hearty breakfast indeed.

As is typical with cheetahs they were trying to eat as much as possible in as short a time as possible. To avoid being detected, they stayed hidden in the long grass. We waited and watched to see what would happen next. What we got in return for our patience was a real treat. The mother waited until her cub was full before moving out of the grass onto a nearby anthill on the other side of the road.

The mother made herself comfortable on the anthill and her cub tried to do the same. But with its tummy so full, the cub found it difficult to find the perfect position. We watched and couldn’t help but chuckle as the young cub tried and tried to sit comfortably. At one point it almost rolled down the anthill! 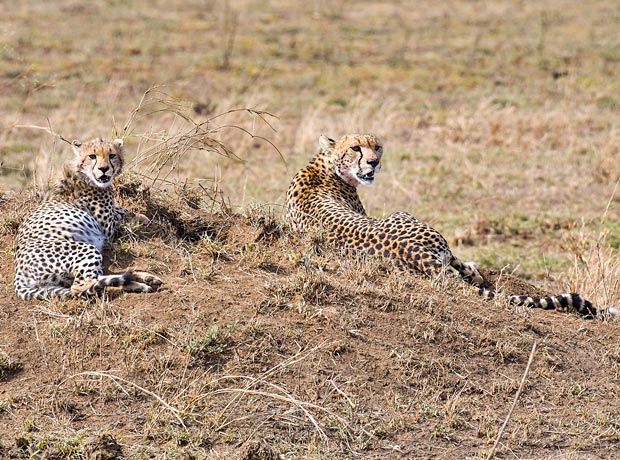 It was great to see that the mother had been successful to rear at least one cub. The mortality rate of young cheetahs in the Serengeti is extremely high, but this mum was undoubtedly very experienced. Eventually the mother and cub moved off and we left them to digest their breakfast in peace and quiet.