Home//Stories//The dry season in the bush
Previous Next

The dry season in the bush

The bush can be an unforgiving place and for the creatures that call it home no other time is harder than the dry season. “Survival of the fittest” is the motto of the bush and a number of animals perish during these harsh conditions.

Recently, I was out on safari and all parks we visited were very different to each other except for one thing: they were all extremely dry.

We started in Tarangire National Park where most of the seasonal rivers where left bone dry. As for the many elephants in the park, well, they always seem to find water. Driving along the banks of dried up rivers, we saw countless herds of elephants who were busy digging holes in the sand to look for precious water. They have mastered this technique and are not the only ones who profit from it. Other animals tend to quickly rush in after the elephants have moved off to get a sip of water.

Our journey continued towards Lake Natron which was scorching hot. At one point the thermometer read over 50 degrees Celsius. The vegetation had been burnt by the sun and apart from a few green trees, the landscape had turned yellow. The water levels of the lake itself were alarmingly low. The Ngare Sero River in the area flows throughout the year, but the water is high in fluoride making it not fit for human consumption. Even though the Ngare Sero village is so off the beaten track, the local government has managed to supply the whole area with clean water.

We continued to the Serengeti where we were greeted once again by golden dry grass and lots of dust. Some parts of the northern areas had already been burnt by the authorities, but most were still to be burnt. A lot of people ask why the authorities burn these areas and whether it is controlled. It takes careful planning and execution, but if done correctly, the ashes provide a fertilizer. After the first rains, lush green grass races out of the ground!

These controlled burns are good on one side and bad on the other: some animals like birds profit whereas countless numbers of insects and reptiles perish.

At one of the hippo pools, some 30 hippos had squeezed into a small area containing mostly mud and a little water. The Retima River was very dry and one could sense the tension in the air amongst the hippos. Arriving at the Retima hippo pool, I was surprised to hear that the park rangers had to fill water into the hippo pool as it had dried up like a rock. 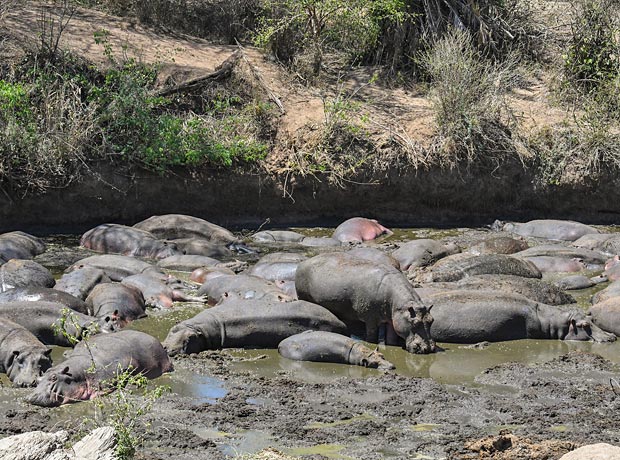 As far as I can see, the driest place of all was the Ngorongoro Crater. Standing at the top of the view point, everything except the swamps were dried up including Lake Magadi, which was reduced to barely a puddle. Driving into the crater basin, it was clear to see that the rains were dearly needed. Most of the more than 30,000 animals had moved towards the swamps behind the hippo pools. 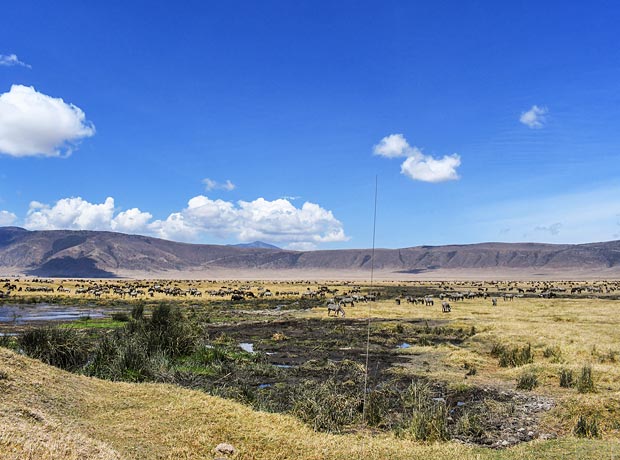 All other areas were deserted and even the grass had been grazed down to dust.

The short rains that are expected to fall by mid-November will be a huge relief for all the creatures that call the bush home.