The Maasai are probably the most well-known of the about 130 peoples in Tanzania. They live a seminomadic life and are known to uphold their traditions and customs despite modern life’s influences. Some Maasai villages welcome visitors to introduce them to their way of life. The Olpopongi Maasai Village is one of them.

It was built according to traditional Maasai villages and the guides come from the surrounding area. By visiting this village, you will also support the local population. At the same time, the Maasai will take the opportunity to clear up misconceptions and prejudices people may have about them.

When I visited the village, I carried with me my ideas and expectations and was curious to see which one of them would hold true. After a two-hour drive through beautiful Tanzania in West Kilimanjaro, having Mount Meru on the one and Mount Kilimanjaro on the other side, we started spotting small Maasai bomas. We followed the signs and eventually reached Olpopongi in the steppe, hardly distinguishable from other villages.

Arriving at the gate, we were greeted with a typical Maasai song. A guide explained that there would be a dance welcoming us as guests and we’d be welcome to join in at any time. The women swayed their necklaces up and down and we tried to follow suit – it was a lot more difficult than it looked!

After a welcome drink, we checked into our houses, called Engaji. These houses are traditionally built by the women using dried cow manure, clay and wooden sticks. There are two separate sleeping areas, one for the parents and one for the children. Up to four people fit in one of the visitors’ huts. You sleep on soft mattresses under a mosquito net – that’s not very traditional, but it’s comfortable. It’s rather dark in the huts since only small openings let sun light in. 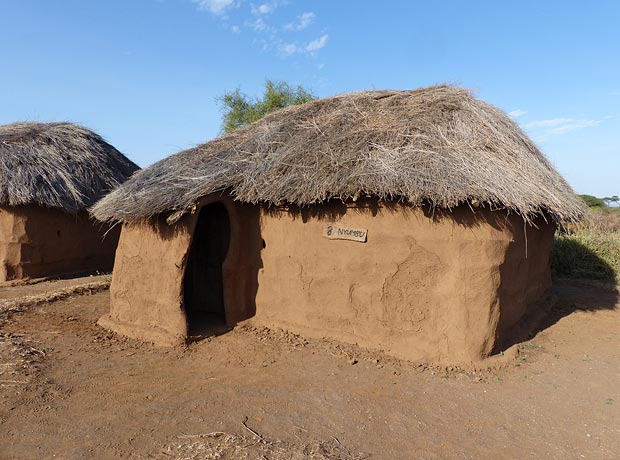 After a delicious lunch of chapati, pilaw and ugali we started our short school lesson. In a half-open room equipped with a board and posters on the wall, as well as every day utensils, our guide taught us about the life of the Maasai and answered our eager questions. 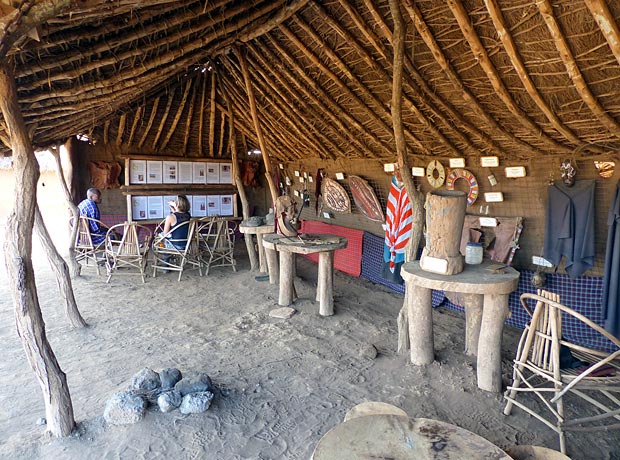 Having tea with the Maasai

We visited an older lady in “her” house and got the opportunity to see what a traditional Maasai hut would look like. She made tea for us and we had a very nice chat. Since of course we didn’t speak any Maa, a younger Maasai translated for us. There was a small fire going in “her” house, which is used for cooking during the day and to keep mosquitos at bay during the night.

On occasion of our visit, the Maasai even slaughtered a goat. While they prepared the meal, we went on a short bush walk with our guide who explained to us the different plants and their remedies. 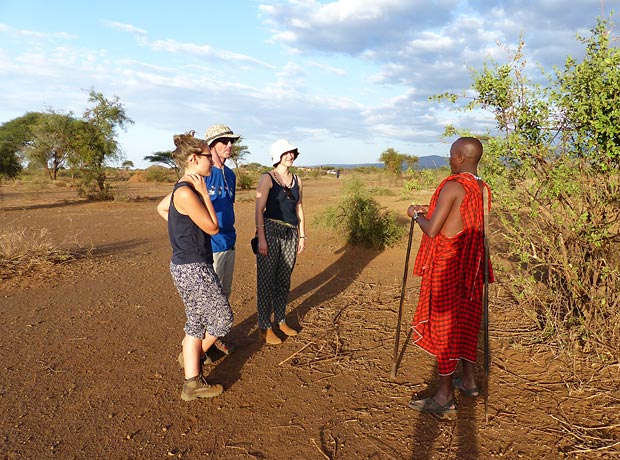 When we returned, dinner was ready! There was also a braai which was delicious and ended with a grilled pineapple. Afterwards, we sat around the fire together with the Maasai and ended the evening with another dance. 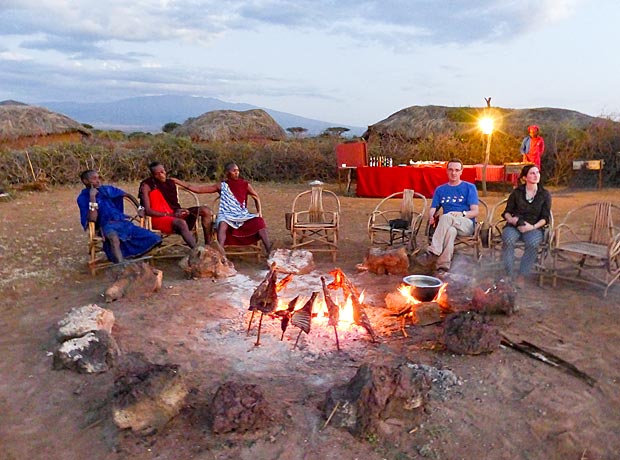 I woke up early the next morning to see the sunrise. The sun rose behind Kilimanjaro and it was incredibly peaceful and tranquil, sitting there and watching the sun starting a new day. After a great breakfast, we headed back to Arusha – taking with us a wonderful experience and a better understanding of the life of the Maasai.

We organise your visit to the Olpopongi Maasai Village as day trips. Just get in touch!