The greater kudu of the Ruaha National Park

Recently I was on a safari in the southern part of Tanzania. Amongst the places we would be visiting I looked forward to the Ruaha National Park the most. Why? It is not only the beauty of the park fascinates me but also the fact that it is one of the best places to see the elegant greater kudus.
Ruaha has both lesser kudus and greater kudus as the vegetation creates the perfect habitat for them. Lesser kudus however occur mainly in the north of Tanzania. I have seen these large antelopes in the Tarangire area before, but these kudus are very shy there and hardly wait around for viewers to get a few photos. 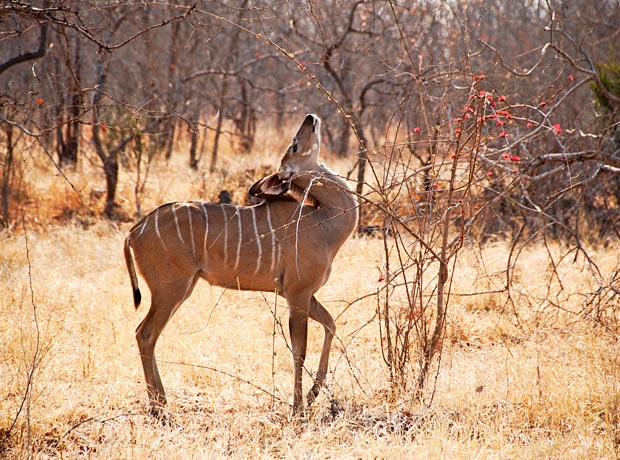 Kudus can be seen throughout the day, however in the late afternoon they come out into more open areas to graze. So there is a better chance to see them in the afternoon. They are very gentle and stealthy antelopes; they possess a certain mysterious charm. They are always aware of what is happening around them and their movements seem carefully planned.

The Ruaha is the largest park in the country and remains one of the true wild areas in Tanzania. There is only a few small lodges and is far from a major town or city and therefor only visited by just a handful of people every year.
We entered into the park after lunch time and were immediately scouting the area for anything spiral-shaped. Our first stop was at the main bridge over the scenic Ruaha River. Here we encountered a group of elephants who enjoyed splashing around in the cool water. Although the area around the river was thriving with wildlife, we did not spot any kudus.

As the day started to come to an end, our guide indicated that it was time to head home. As disappointed as we felt for not spotting a greater kudu, we decided to accept the other beautiful things we had seen and headed to camp. During the drive back, however, our guide suddenly stopped. With a big smile on his face he said “look over there, papa kudu is saying goodbye to you”. The bull kudu we spotted was in his prime, with perfectly symmetrical horns he stood on his mountain as a king would on his throne. We all managed to get some photos and were happy to go back to camp. 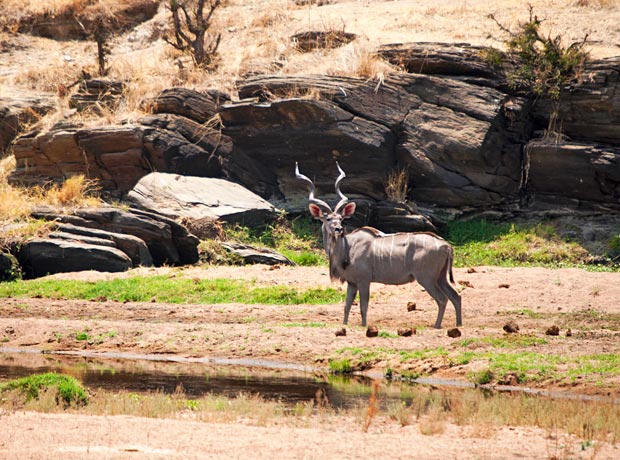 The following day we spent a full day in the park and I am happy to say we saw several herds of greater kudus in different locations – near the rivers and around the foothills doing different things.
Anyone planning a safari in the south of Tanzania should definitely add Ruaha to the list. You will not be disappointed. We drove from Iringa and it took us four hours to the park gate. We stayed at Chogela campsite which is 20km from the main gate.