Lions and Hyenas – a standoff in the crater

In general, lions and hyenas are considered to be mortal enemies. Competition in the bush is fierce and lions would not think twice about killing a hyena and if there are enough hyenas then they would also turn on a lion.

When lions make a kill there is usually a strict pecking order amongst the pride. Lionesses do most of the hunting, but it is the males who get first picks. After they have had their share they leave the remaining carcass to the rest of the pride. Its only after the pride is done, do other scavengers get a seat at the dinner table.

Terrestrial scavengers such as hyenas and jackals watch vultures and other birds of prey very closely as their behaviour usually gives them a good indication of potential meals. 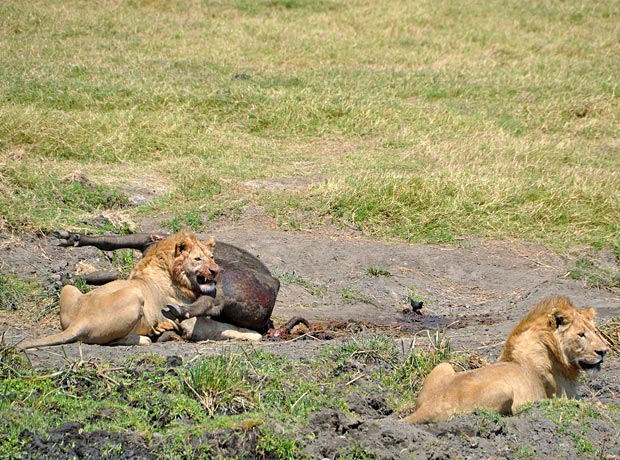 It is not always easy for lions to enjoy their meals in peace. The same goes for leopards and cheetahs but leopards have the advantage of being able to eat their prey in the safety of a tree. Scavengers are excellent at annoying predators at a kill and often their persistence and patience pays off.

I was on a safari a while back where we got to see a standoff between four young male lions and a few hyenas. As we arrived on the scene, the young male lions had killed a cape buffalo and two of the brothers were busy enjoying their meal.

Slowly but surely one hyena after another started appearing at the kill. A little further away we could see another male lion approaching and as he got closer, the hyenas became more nervous. By now there were three male lions at the kill and about seven hyenas who were edging closer and closer. 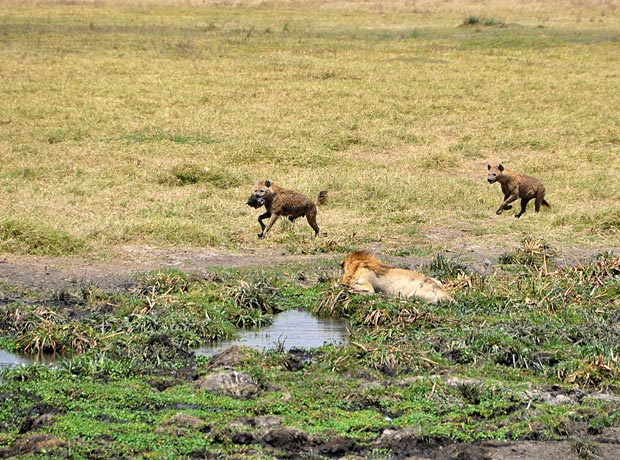 The fourth male lion seemed to appear out of nowhere and the hungry hyenas did not even realise the danger behind them. Before we knew it, the male lion charged directly at them. The hyenas were lucky as they managed to out run him. We witnessed the lions getting agitated and every now and then they charged at the hyenas to keep them at bay. It was quite interesting to see that a black backed jackal was allowed to feed within inches of the male lions. Understandably, the hyenas were all but pleased about this and turned their interest to the jackal who was eating some scraps. Relentlessly, the hyenas ganged up on the little jackal to the point where it decided to move away.

In the distance we could see more and more hyenas making their way to the kill – undoubtedly the news of a free meal had reached them by bush radio. We watched in suspense as the standoff took place. After enjoying their share, the lions eventually left the kill to the hyenas. For the hyenas this was a real feast as the lions had barely ate a quarter of the buffalo. I later heard on the radio that there were almost 60 hyenas at the buffalo carcass which within an hour was rendered down to just bones.