For most, vultures are perceived as fierce and barbaric birds. Maybe their affiliation with death has given them that label? It is a shame; these birds play a vital role in keeping wild areas free of disease and rotting carcasses.

A little-known fact is that vultures belong to the fastest declining group of birds in the world. The status for some species has declined a notch from endangered to critically endangered. As the reproduction rate of vultures is very slow –  some lay only a single egg every 1-2 years – it is vital that these birds be protected.
Most of the vultures are being killed with the use of poisons, which are put in dead carcasses. One poisoned carcass can kill up to a 100 birds from.
Other reasons for the decline are the illegal trade of their body parts for traditional medicines, the reduction of habitats and lack of food.
As the poaching crisis in Africa is getting more and more serious, poachers know that soaring vultures in the sky can alert game rangers to their whereabouts. That is why they poison the vultures, so that they can do their illegal business without being watched.

Tanzania has eight species of vultures belonging to the same family as eagles, buzzards, hawks and kites. The most commonly-seen vultures are the white-backed, while the largest vulture in Tanzania is the lappet-faced vulture, with a wingspan of up to 3m. 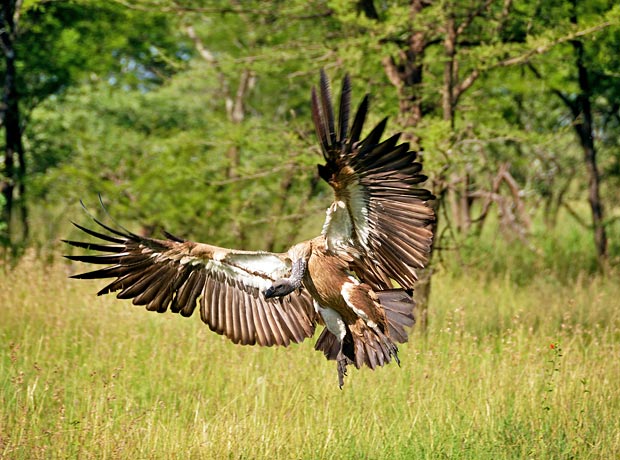 Vulture wings are fairly broad and allow flying for long periods without having to flap. They use pockets of warm air (thermals) to fly, moving from one thermal to another, in the process surveying vast areas for potential food.

A vulture’s eyesight is incredible. Each eye has two lenses; one is used to scour the area and the other to magnify objects. It is said that a vulture can read the headline of a newspaper from a height of 1km!
Most vultures have almost bald heads with only a thin layer of down covering the skull. This prevents feathers becoming soiled when they feed on the inside of a carcass. A vulture can also regulate its temperature either by exposing or hiding its head depending on the weather conditions.

In front of its oesophagus a vulture has a crop. This sack-like add-on allows the bird to carry a backup supply of food to be consumed later. Some vultures can cram up to 1,5kg of uneaten food into their crops! 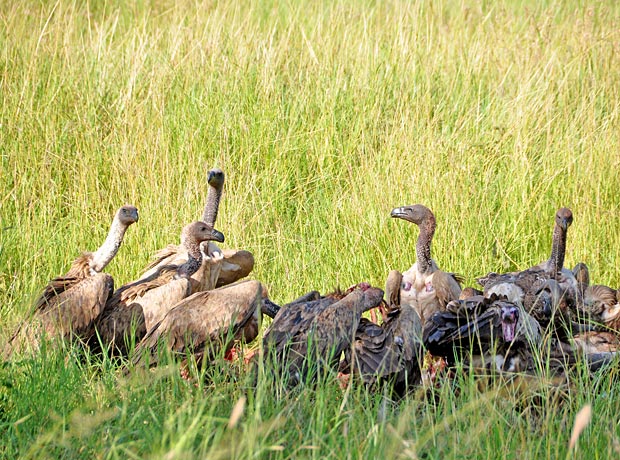 Vultures’ stomachs secrete potent acidic gastric enzymes which can digest even the toughest of bones within a 24-hour period. Their strong immune systems help to safeguard the birds from the deadly germs of a rotting carcass.

Vultures can be seen in all of the national parks in the northern circuit of Tanzania. So next time you see one, do not just think of it as a horrible bird, but rather a clever cleaner of the wild.