Home//Stories//Nuts about cashews
Previous Next

Cashews are amongst the one of the most consumed nuts in the world. Eaten as a snack or in cooking, cashew nuts are valued for their eating quality and is high in a variety of vitamins and minerals including magnesium, copper and Vitamin K. It contains about 10% starch and is used in Indian cooking to thicken sauces and soups. For Tanzania smallholder farmers it is an important cash crop and way of making a living.
Some claim that Tanzania produces the best cashews on the African continent and is certainly one of the world’s largest producers.

The majority of plantations are found along the southern coast in towns like Mtwara, Lindi, Ruvuma and Pwani. While most of the cashew trees were planted in the 1950’s and 60’s, more and more farmers are continuing to plant cashews.
Tanzania’s environment and climate is very suitable for growing cashew nuts. The tree itself is drought resistant, do not need very rich soil and requires only minimal care to grow. This is perfect considering some of the 300 000 cashew farmers in the country live in very rural areas and do not have access to irrigation or fertiliser. 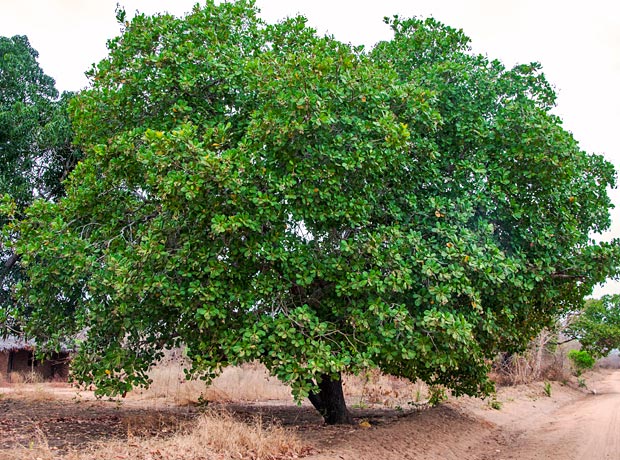 The tree itself is a large tropical evergreen that can grow up to 14m high. The flowers are pinkish in colour and once they are gone, a fruit appears. The actual nut is found in a protective shell below a pear-shaped fruit, known as a cashew apple. As the fruit ripens it turns yellow to red.
Cashew apples are edible and have a sweet smell and taste. It can be used in cooking (curries) or to make drinks – either a refreshing juice or an alcoholic beverage called gongo. The harvesting season in Tanzania usually starts October and ends in February. It takes 3 years after planting before the production begins and up to 8 years before it is economically viable. 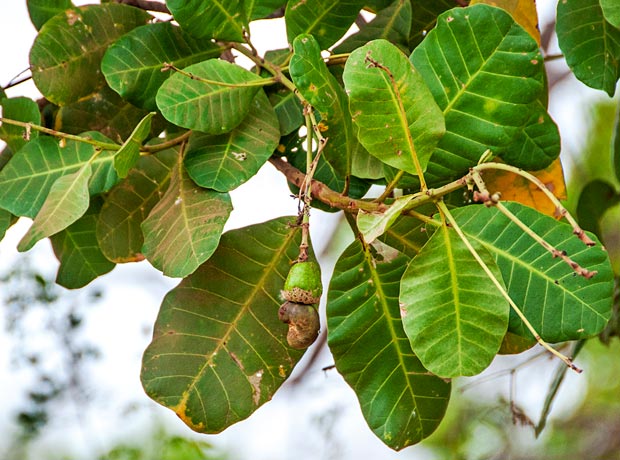 The fruits fall off the tree when completely ripe. These are collected into baskets by all the members of the family, both young and old. The nut is then separated from the fruit and immediately placed in the sun to dry.
Getting the cashew nut out is actually not easy. The protective shell around the nut has an almost acid-like liquid that can be very dangerous when it comes in contact to the skin, causing blisters. Due to the lack of processing factories most of the cashew nuts are exported raw, mostly to India.
For those who do process manually, the shells are first soaked in water, then roasted. After roasting the shells are placed on a stone and pounded with a wooden mallet. The shells are covered in wood ash; the wood ash absorbs the acidic liquid when cracked open.  After the actual nut has been separated from the shell it is cleaned of any particles and then dried. This drying is mainly to help with the removal of the testa, the last layer on the nut. Once the testa is peeled off, the nuts can be graded, roasted, flavoured or packed for selling and further shipping.