Banded mongooses (Mungos mungo) occur in a wide variety of habitats ranging from savannah to open forest, but wet areas like swamps are usually not preferred. They are medium-sized mammals, with adults up to 45 cm long and weighing around 1.5 to 2kg. Their fur is shaggy and greyish brown with several dark brown or black horizontal stripes on the back. They have large heads, long legs and relatively short tails. 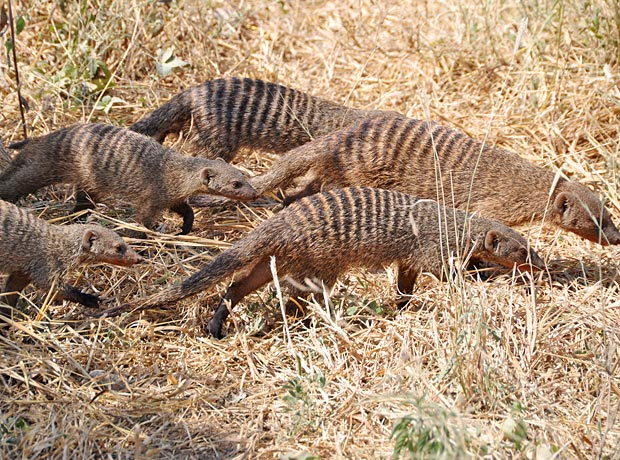 Normally these mongooses live in colonies of up to 20 individuals, but I have seen even larger groups in the Serengeti. They have a strong social system and an average colony consists of several breeding males and females plus sub-adults and offspring. All the adults co-operate with each other and help rear the young. Banded mongooses are strictly diurnal. This means they come out in the morning and spend the whole day feeding, foraging and resting.

This species of mongooses uses various types of dens for shelter like rock overhangs, gullies and thickets but they are mostly found in termite mounds. Some of these termite mounds offer several access points for easier access for everyone as well as plenty of emergency exits. At night the whole group tends to sleep together in the same den. They move to other communal dens every three to five days. 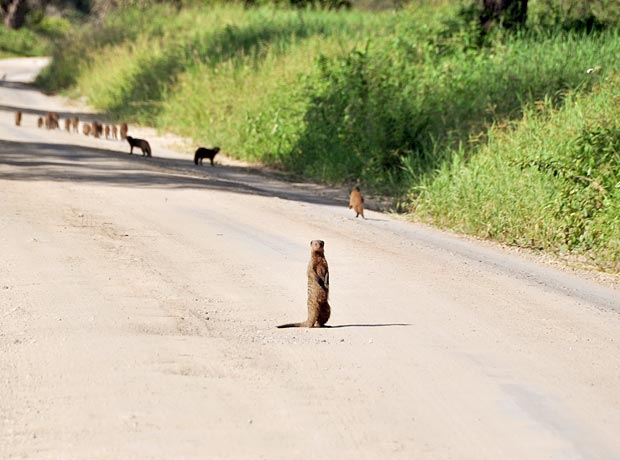 Females all come into oestrus roughly ten days after giving birth and are guarded and mated by the dominant males. After a gestation period of 60 to 70 days all the females give birth around the same time (if not on the same day) to a litter of up to six pups. The pups spend their first weeks in the dens, with one to three babysitters to look after the young whilst the rest of group goes out to forage. After four weeks the pups are big enough to go foraging, but each pup is escorted by an adult who protects against predators, helps and teaches the pup to find food. The pups are nutritionally independent after three months.

The banded mongoose feed predominantly on invertebrates but will occasionally also eat amphibians, reptiles, small mammals and fruit. Even though they forage as a group, each individual looks for its own food. They use their good sense of smell to locate and their long claws to dig the prey out.
When they encounter a snake or other danger the whole group huddle together and attack the predator. Banded mongooses are known for their quick reflexes; regardless of how quick the snake is; mongooses almost always win with barely a scar. 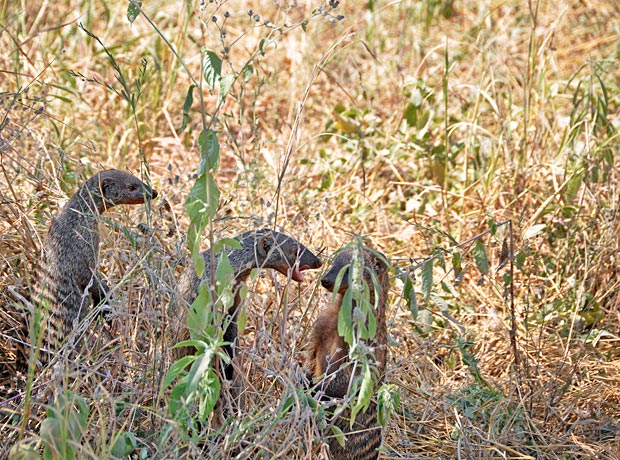 Habitat loss adds to the decease of the species as they are not so easily found in towns and cities, but the main threats to banded mongooses in the wild are birds of prey and occasionally rock pythons.