Home//Tanzania through the eyes of our guides//How do lions behave in the wild? Our guide Max recalls wildlife scenarios on safari in Tanzania
Previous Next

How do lions behave in the wild? Our guide Max recalls wildlife scenarios on safari in Tanzania

A safari is only as good as the guide who accompanies you. Max has been working as a safari guide in Tanzania since 2012 and has been part of the Tanzania-Experience guiding team since 2018. During his numerous years of safari guiding, he observed many interesting wildlife scenarios and has come closer to understanding how lions behave in the wild. One way he upskills and learns new things, is by exchanging knowledge with other safari guides. 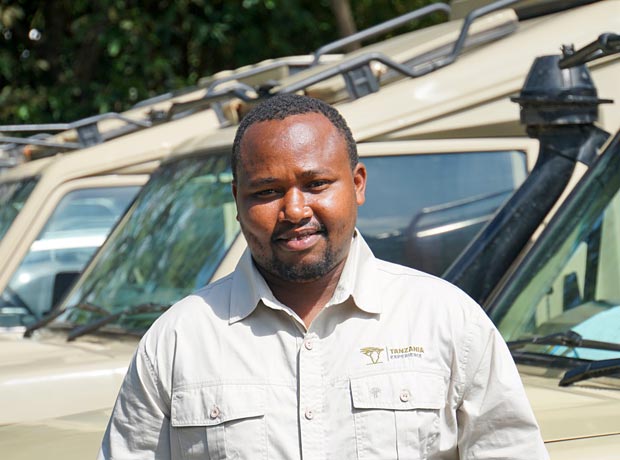 I think I am a good guide because I love what I do. I enjoy learning and seeing something new every day. I read a lot on the internet, and we also have a WhatsApp group with other tour guides. I buy many books about wildlife, too.

In April this year, I will be attending a training with guides from different tour operators. For one to two weeks, we will be meeting in the Lake Manyara National Park and share some fresh ideas and the knowledge we have. I am eager to constantly learn and develop. I think this is what a guide needs: The desire to learn, a true interest in nature and wildlife and wanting to understand how animals behave in the wild.

I never heard about a safari guide WhatsApp group! What is this group about?

The WhatsApp group is something we guides set up. We use it as a way to share knowledge. Every guide went to a different college, so everyone has a different knowledge base. You can post questions in the WhatsApp group, and people answer them there. Also, we will discuss on the group what might be a “good answer”; with wildlife that is not always clear. Moreover, if I have an idea or a new perspective on something, I will also share that in the group. 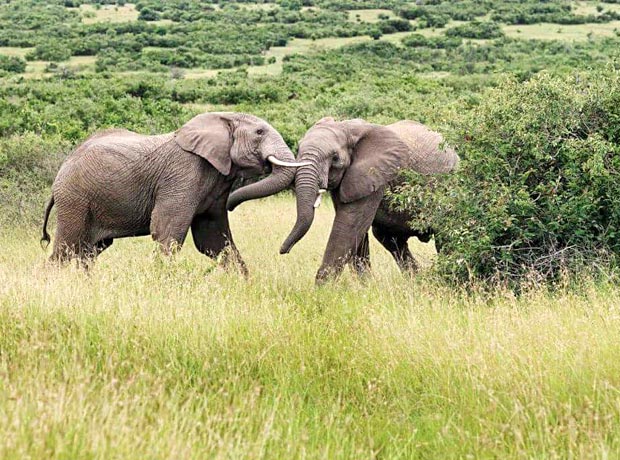 What are some of the things you discuss in the group? Was there something posted in the group that you found particularly thought-provoking? 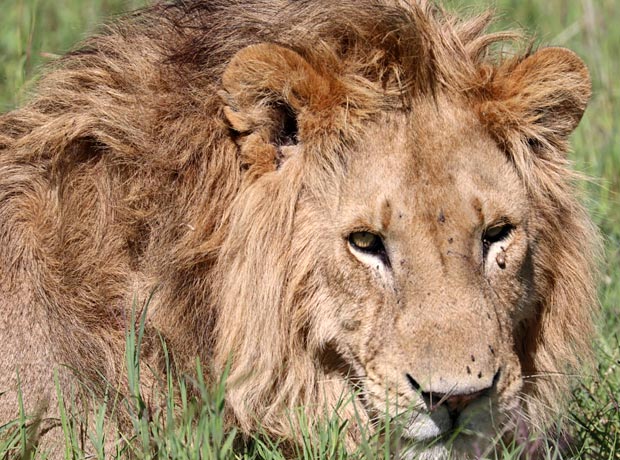 The overarching reason was the fact that lions are social cats. During the Great Migration, predators are moving with the migrating animals to hunt them. So, at that time, different prides are meeting, and males are fighting with other males to defend their family pride. Sometimes, when the male leader of a group is too weak, another male can take over that group.

During all this “mixing”, females might join a different lion family, too. At first, the male leader of the new pride will try to push her out. However, they are not really “fighting” the females. The males will spend a few days trying to push the new female away, but later, they will accept her into the family. What the guide saw, how the male lion behaved, was to show the other females that this new female is not a member of the group. But after a few days, the male leader can accept the female. When he accepts her, they normally mate. Then she becomes a part of the family. 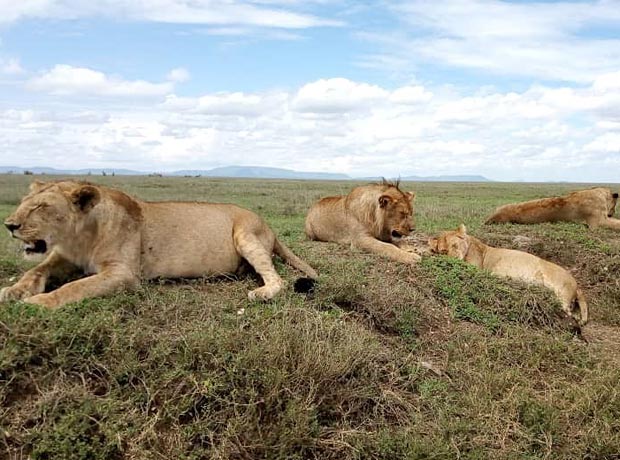 Fascinating to hear how lions behave in the wild. What memorable scenarios did you observe while on safari?

There were a lot of them while out on guided safaris with my guests. One time I was in the Serengeti, and I saw a lion killing a female warthog, a Pumba. That warthog had a little baby, maybe one month old. While the lion was killing the female warthog, the baby was hiding. Then a hyena started crying, ready to catch the little baby. Ultimately, the lion ended up killing the hyena. The lion didn’t even eat the Pumba, it just left the dead body of the warthog. And it also left the baby alone. That was really moving for me. 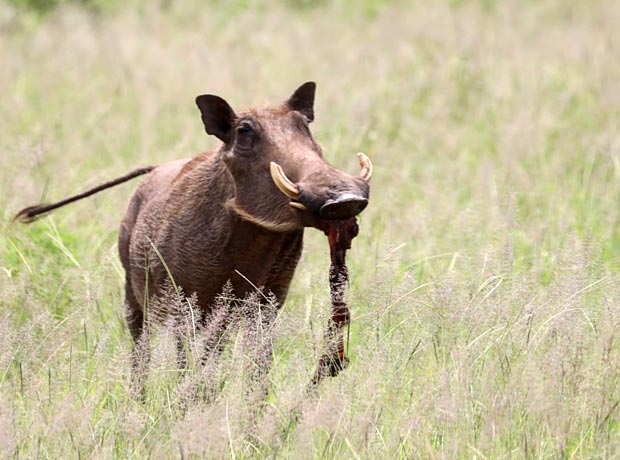 Why do you think the lion behaved liked that?

Sometimes you would see a lion killing another predator, let’s say a cheetah. Maybe this cheetah has cubs. But when the lion kills the cheetah, the cheetah’s cubs will stick with the lion. The cubs might end up spending a few days with the (female) lions. That is what actually happened in the Serengeti in 2018. The predators feel ashamed when they kill mothers. When they see the cubs, they regret their kill and often spare the cubs. 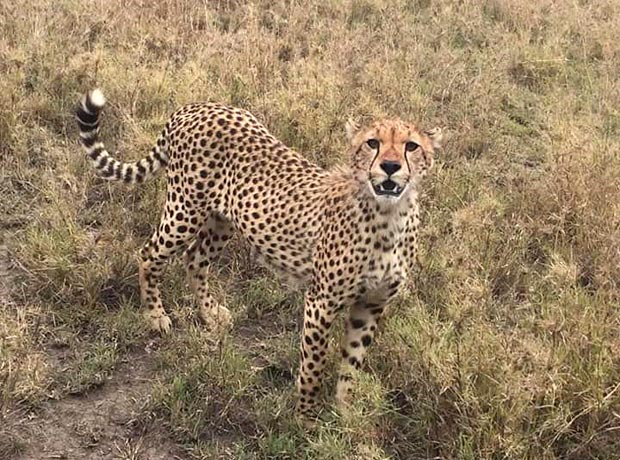 Unfortunately, these cheetah cubs died, because the lion didn’t have milk and ended up pushing them away. When the cubs are younger than six months, they still need milk. Only after six months, they start eating meat. When a female in the pride of lions has babies at that time, they can take on these cubs, but with solitary predators the cubs will die.

So, lions normally spare the cubs of their prey?

Yes and no. A lion will kill, for example, a leopard for competition. When this leopard crosses a lion’s territory, the lion might also kill the leopard’s cubs. But then one day, I saw a leopard killing a hyena. The leopard didn’t do anything to the hyena’s cubs. He just tried to smell and touch them, and then left. 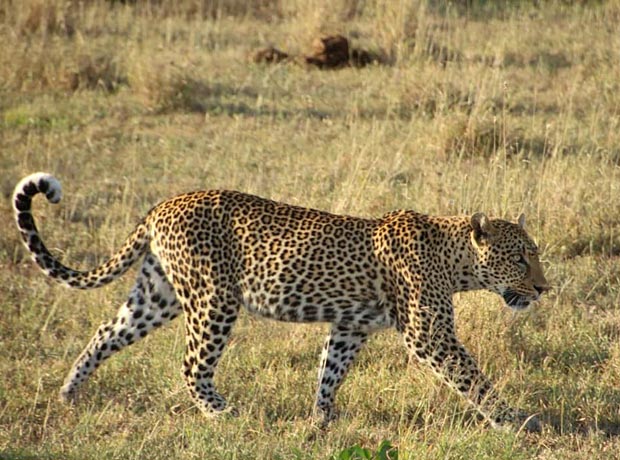 Thank you so much for sharing these insights, Max. Now I really want to go on safari in Tanzania with you! On that note, why do you think people should visit Tanzania? What do you think makes Tanzania special?

Our national parks. We in Tanzania value and take care of our nature, because it is at the core of everything. Tanzania as a country really makes an effort not to disturb nature, and we put a lot of work into conserving nature and wildlife.

Other countries might create artificial waterholes in national parks so that animals go there to drink. They alter nature to make their guests happy. We don’t do that, we let animals find their natural water sources themselves. We let them migrate and move out of the parks. 20 kilometres before Tarangire National Park, you will see wild animals, elephants, zebras, elephants. That is because our government tries to keep the area clear, to allow nature to take place. And we have such a rich and diverse wildlife in Tanzania.

If you want to go on safari with Max, and learn more about Tanzania’s wildlife and its behaviour, contact us. Together, we will find the right trip for you, and show you a world you have yet to uncover.