A Hyena feast in the Ngorongoro Crater

Spotted hyenas are one of the most common large predators in East Africa and the Ngorongoro crater is no exception. This collapsed volcano teems with large hyena clans that easily outnumber the lions. Researchers from the Hyena Project in the Ngorongoro Crater say that currently there are eight resident hyena clans, each consisting of between 38 and 95 individuals – a total population of around 450 hyenas.

Most people think that hyenas only scavenge, but in fact hyenas are very organised and successful hunters, being able to take down anything they target. From Thompson gazelles to large Cape buffalos, hyenas chase their prey to exhaustion even if it takes 10 kilometres!
Competition in the crater is fierce, due to the small area and the abundance of large predators like lions. Lions are the hyena’s biggest enemy and the main cause of death in the crater. A male lion outweighs a hyena three times; all it takes is one hit from the paw of a lion to kill a hyena.

It is also claimed that lions are the ones who more regularly steal meals from hyenas than the other way around. That said, a few years ago when I was in the crater I experienced an incredible sighting: a pride of lions had hunted down a wildebeest, only to be chased away by a huge number of hyenas! It was so difficult to count them however, but I remember counting at least a hundred or so. The lions retreated and were nowhere to be seen. 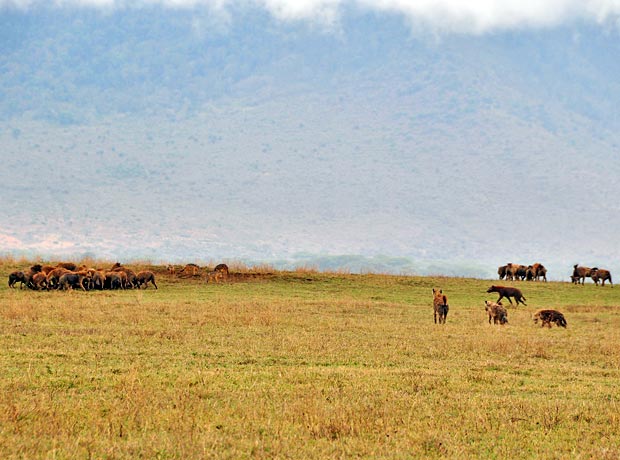 It was an incredible spectacle of sounds and sights, as hyenas were racing in from all directions. At the carcass itself there was a chaotic scene of fur, claws and teeth. Each hyena was trying to get a piece, no matter how big or small. The laughter and whooping calls from the hyenas just echoed through the whole crater.
As some had enough to eat and just watched as the others fought it out, one hyena in particular managed to get the tail and proudly made a hasty retreat only to be chased by the others. 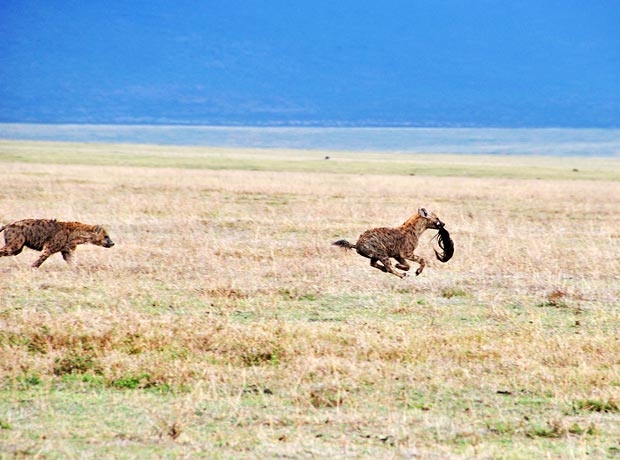 It was truly an impressive event, we sat and watched as the hyenas made the carcass literally disappear in a matter of minutes.