An intimate pair of leopards in the Serengeti

Leopards (Panthera pardus) are by far my favourite cats and the Serengeti is a great place to see them. Anyone going on a safari dreams about seeing one and I always tell my guests that if a leopard decides that it wants to see us, then we will see one!

The Serengeti National Park is blessed with a healthy population of leopards and if you spend a few nights there then chances are good that you will spot one or more of these stealthy creatures.

Recently in the Serengeti, we were not only lucky enough to spot a leopard, but we also got to experience something very special.

We were driving around near the “Masai Kopjes” area when our guide told us that he heard about an interesting leopard sighting over the radio. So we went over to see what was happening and as was to be expected, there were already a dozen or more cars at the scene.

Spotting the leopard was not easy. But there he was, an elegant male leopard sitting atop a granite rock, watching us closely from his perch. Through my binoculars I managed to see a second leopard close by. 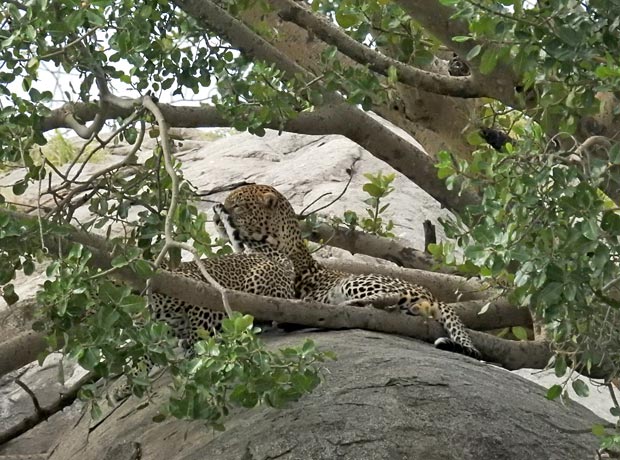 Leopards are generally solitary and seeing more than one could only mean that the second one was a female with cubs or that this was actually a mating pair.

We sat and patiently waited when the female suddenly got up and approached the male. Slowly getting closer, she tempted him with her movements and before we knew it the mating process began. It was however over as quickly as it started and the female returned to her rocky perch. 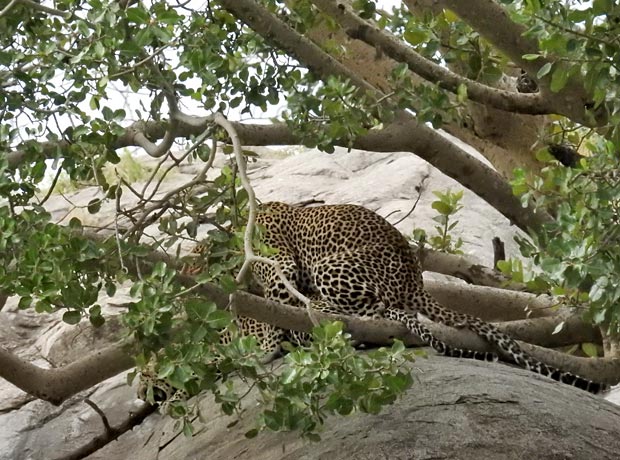 It was less than 10 minutes later when the female returned, once more using her movements to attract interest from her counterpart. This time round, the mating process was very vocal and although we were a few hundred meters away, we could hear the male’s aggressive grunting noises. After the copulation, the female vigorously clawed the male who responded with a few violent jabs of his own. Although, quite scary for us to see these large cats attacking one another, this is common practice during mating.

This was only the second time I witnessed the violent but yet passionate mating of leopards.

Females are on heat for 5 to 7 days and they are often injured by the larger male during the intimate process. After a successful encounter, both the male and female will go their separate way. Gestation usually lasts for about 90 to 100 days after which the female gives birth to a litter of 2 to 4 cubs. Females look for caves, crevices among kopjes or even hollow trees to give birth, making sure they have a safe den for their cubs. The cubs are born with their eyes closed and they tend to open after 4 to 9 days. Their fur is also longer and more greyish at birth with the distinctive rosettes only appearing later. The cubs are mobile enough to follow their mothers on hunts after approximately 3 months and although they can fend for themselves after about a year, they tend to stay with their mothers for up to 18 to 24 months before moving on to start their own independent lives.